A first ever hat trick by Jamie Short was not enough for an under strength Taunton team to prevent Paulton reaching the Quarter Finals of the Southern League Challenge Cup at Winterfield Road. The intention of manager Rob Dray to field a strong side was undermined by illness and injury but the youngsters who came into the squad gave their all even though some were playing out of their normal positions.

The first goal came after just 8 minutes when a cross by Dave Sims-Burgess was slotted home by Marcus Day. Captain for the night Lloyd Irish will not want to remember the second goal as he turned an Ed Butcher corner into his own net after 19 minutes. Shortly before this Taunton’s task was made harder when midfielder Callum Watts had to go off with a knee injury to be replaced by James Cottrill. Paulton had the better of the first half and added a third goal just two minutes before the break with a shot by Day.

Although the visitors made a good start to the second half it was the hosts who increased their lead after 54 minutes when Sims-Burgess converted a penalty having been brought down by Irish. Taunton’s efforts were finally rewarded after 61 minutes with a powerful shot by Jamie Short. Unfortunately the home side added another just three minutes later through skipper Charlie Hitchings playing against his old club and a further four minutes had elapsed when substitute Jake Sloggett crossed for Craig Allan to add the sixth.

Two late strikes by Short after 83 and 85 minutes gave the visiting supporters something to cheer but it was the home side who earned a home quarter final against Winchester City who beat Sholing 4-0 on the same evening. 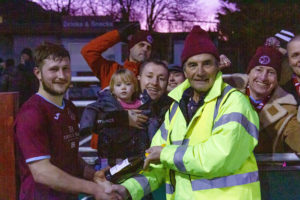