For a while it looked like Town’s long Tuesday night trip might have been in vain with the floodlights at Penydarren Park playing the goat ahead of the scheduled kick-off time. They have history of wasted trips to this venue – in December 2002 a fixture between the sides was abandoned at half-time due to a frozen pitch. As things transpired, a postponement may have been a preferable outcome as Taunton failed to capitalise on a flying start and ended up well beaten.

By 8pm Merthyr’s 3G pitch was fully illuminated, by 8.07pm the game was in action and by 8.10pm Taunton were ahead, Ollie Chamberlain picking out the top right-hand corner of the net with a peach of a strike from over twenty yards out.

The Peacocks were indeed strutting during the opening exchanges and only a smart save by Alex Harris from a Ryan Brett glancing header prevented the lead being doubled. However, the home side levelled with their first serious attack, and this proved to be the turning point. On the quarter hour Gethyn Hill chased down a seemingly lost cause and, from right on the goal-line, cut the ball low into the penalty area where Eliot Richards gleefully converted. Buoyed by this success, the Martyrs nearly took the lead when Hill cushioned a Dan Summerfield cross from the left just wide. Former Taunton loanee Ben Swallow was then inches away from giving Merthyr the lead when he fractionally failed to connect sliding in on an Ian Traylor centre.

By now a second Welsh goal was looking a probability and it duly arrived in the 33rd minute when Richards created himself space on the edge of the box with some nifty footwork and clipped a fine left foot shot that found its way into Lloyd Irish’s bottom left-hand corner via the post.

Before the break Brett had a shot blocked and Alex Harris saved well at the feet of Luke Spokes as Taunton strived to get back to parity. The visitors made a bold change at the break, bringing on Matt Wright for Jamie Short, but within five minutes they were further in arrears. Traylor ran on to a Lee Lucas through ball and, with everyone expecting a cross, tried his luck from an acute angle and found the net.

Town’s next roll of the dice was to throw on Dan Demkiv for Spokes, but before the youngster could have any impact up front alongside Wright, Merthyr had stretched their lead further, Richards completing his hat-trick by deflecting a Traylor drive into the box out of Irish’s reach.

Twelve minutes from time Dan Sullivan put over a cross from the left that was headed down by Shane White at the back post to Chamberlain who hooked home to give the visitors a glimmer of hope. In the closing stages they worked like Trojans to reduce the deficit still further. Harry Kite sent a skimming shot just wide, Nick Grimes twice went close with headers and Chamberlain and Taunton’s third substitute, Lewis Hall, had further efforts blocked. But they could make no further impact, and few could deny Merthyr were deserving of their win. 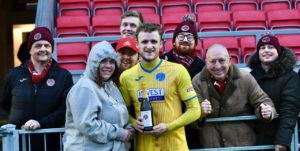