The common National League template of well-organised teams largely cancelling each other out was again in evidence at Vauxhall Road as stalemate ensued. A draw was a fair result over a scrappy 90 minutes although one couldn’t help feel that this may have been an opportunity missed to gain all three. After Nick Grimes had given the Peacocks the lead, the home side drew level before the break and even though home keeper Dave Saunders was busier than his opposite number Jack Bycroft in the second half, Town were also forced to man the pumps at the back on several occasions as the Tudors looked to bounce back from their midweek reverse to Eastbourne.

Ollie Chamberlain was restored to the starting line-up to replace Joe Guest, the only alteration to the Town side which had beaten Dulwich Hamlet seven days earlier. A chilly, grey afternoon greeted the teams as they emerged onto the 3G pitch, newly installed since Town’s most recent visit six years previously, and early exchanges were equally as unremarkable. Speedy wide man Brooklyn Ilunga’s run down the right earnt the hosts the first corner of the game which was comfortably caught by Bycroft while Town appeared confident going forward without carving a clear opening until they made a breakthrough after 17 minutes. Joe Budd’s cross was headed out for a corner from which Lloyd James’ delivery squeezed through to the far post where Dan Ball got a touch to Grimes who tapped home from on the goal line for his first goal of the campaign.

The game was brightened up by a triple bout of fancy footwork from the Peacocks midway through the half, backheeled passes from Zac Smith and Nick McCootie finding each other before Smith tried a shapely side heel pass. No Strictly judges were present so a 9 was awarded in their absence. Town’s advantage was then cancelled out just past the half hour, a raking long pass from Kyle Ajayi finding Jernade Meade on the left and he got goalside of Budd to slide the ball across the box and find Josh Castiglione unmarked at the back post and he could hardly miss into an open net.

The equaliser gave the home side a shot in the arm as they had the better of it up until the interval. Ilunga had a shot blocked while Bycroft was not totally convincing from a couple of Hemel corners, managing to gather one at the second attempt before tamely pushing away another during stoppage time which fell to Tudors’ captain Godfrey Poku who fired over the top. Saunders meanwhile showed a clean pair of hands to clutch Budd’s cross at full stretch at the other end.

The Hemel keeper was forced into action again six minutes into the second half, Nat Jarvis holding the ball up well and laying off to Lee Lucas whose 20 yard strike was turned wide. The corner though came to nothing. A yellow card for James, the second in a minute to follow one for McCootie, led to a free kick at the other end, however Meade’s delivery travelled wide at the far post without anyone able to get a touch. Chamberlain then rode several challenges to fire in a left-footer from the edge of the box which Saunders touched wide, leading to two corners which again failed to produce while McCootie saw his effort also deflect for another flag kick, his last contribution before being replaced by Dave Sims-Burgess.

Neither side were able to get on top as the game entered the final quarter. Hemel sub Ogo Obi was having an impact though for his side, seeing a shot deflect goalwards but Bycroft, although wrong-footed, reacted to hold. A punt downfield by a Hemel defender then so nearly ended badly for the Peacocks, Bycroft racing out to clear but not connecting, allowing Obi to curl his effort toward an open goal from the angle of the box. Smith popped up on the line though to superbly head away. Town were unable to clear the resultant set piece, Dominic Morgan-Griffiths firing over, while the visitors survived a further two corners as Hemel pressed down the slope.

The Peacocks missed a chance to snatch victory in the dying minutes. Joe Guest, who had replaced Lucas minutes earlier, was found in space on the right but instead of trying his luck he opted to pass to Chamberlain who scuffed his effort to Saunders. Town’s Man of the Match Ball robbed Ethan Holt as he looked to capitalise on Meade’s long pass as seven minutes of stoppage time began, during which Sims-Burgess saw his low drive safely held by Saunders. Little else of note as a forgettable encounter ended all square.

” It was a good point tinged with our performance levels not where I wanted them to be today………..” watch Rob Dray’s Match Reaction on Peacocks TV HERE 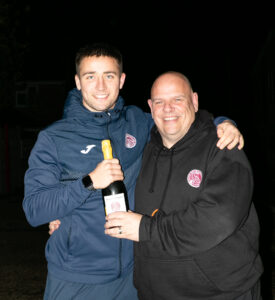