An equaliser three minutes from time deprived the Peacocks of a winning start to the season in West London. After grabbing the lead just before the break courtesy of summer signing Toby Holmes, Town never fully built on that advantage after the break and were undone by a late leveller which on the balance of play Hayes deserved.

With a new-look squad assembled since last season, there were five players making competitive debuts for the Peacocks as the sides emerged on a warm, sunny afternoon. The visitors were soon into their stride though in the opening minute when Jay Foulston’s ball down the left was latched onto by Holmes and as he surged into the box he was brought down just outside. Foulston’s free kick was eventually cleared back out to him but he sliced his effort wide.

Gethyn Hill’s cross was then headed down for Dan Sullivan to volley narrowly wide from 18 yards as Town carried on their encouraging start before Nick Grimes connected with Sullivan’s corner at the near post but the touch proved a routine stop for Jack Smith in the United goal.

Hayes provided their first attempt just before the quarter hour mark, Francis Amartey having a sight of goal but seeing his shot blocked by Ben Adelsbury. Sanmi Odelusi then fired over from a cleared corner, however the Town defence were coping comfortably with anything Hayes had to offer as opportunities at both ends proved rather limited.

Lloyd Irish made his first real save of proceedings when he safely claimed Scott Shulton’s strike from 20 yards before the Peacocks made the breakthrough two minutes before half time. Ollie Chamberlain broke from his own half to find Hill out wide and his pass forward proved perfect for Holmes who deftly sidestepped Smith and tucked the ball home into the open net to the delight of the travelling faithful, considerably well down on usual numbers due to current circumstances. Chamberlain was then brought down as Town threatened again but Foulston’s free kick from 25 odd yards went over the top.

Town were close to adding a second when play resumed after the break, Foulston’s cross being flicked on by Hill to Holmes at the back post and although his header was clawed out by Smith before it seemingly crossed the line a raised flag for offside made any further debate irrelevant. It was Hayes though who began to get on the front foot as they buzzed around the Taunton box, Odelusi flashing a shot just wide of the far post after being played in by Jack Williams. Irish was then alert to block as Williams found space before claiming Omar Rowe’s cross to end the immediate danger.

Chances at the opposite end proved elusive apart from set pieces. A deliberate handball 25 yards out saw Town awarded a free kick but Adelsbury’s effort was pouched by Smith, then later in the half a similar scenario happened when Joe Guest was pushed over and although nearer the box than the first chance, Adelsbury’s free kick was punched clear by the United keeper.

As Town continued to sit deep, Hayes kept pressing, prompted by the impressive Jake Sheppard whose driven free kick was cleared by the Town defence for a corner. Hill sent a dipping shot just over the bar after receiving Jamie Short’s pass as the Peacocks carved an opening but then from a Town corner the visitors broke away which led to the equaliser. Adelsbury’s header from the corner was cleared upfield to Amartey who shook off his marker to reach the edge of the area where a clumsy challenge conceded a free kick. Omar Rowe’s strike was too good for Irish as it found the right-hand corner of his net to bring the sides level.

Hill was close to responding immediately for Town, getting goalside and cutting inside his man before seeing his angled shot being blocked by Smith at the near post. From the resultant Sullivan corner, Guest fired a ground shot wide of the post, the final offerings of a game which the Peacocks couldn’t quite manage to put away but a satisfactory point gained nevertheless with a much-changed team. 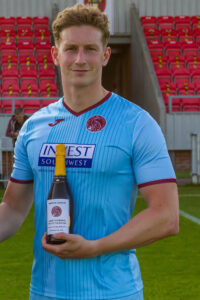