This was not the result the Peacocks wanted to start the season as they fell to defeat on a windy south coast. Gosport have strengthened over the summer and are among the teams regarded as being title contenders but Town were well in the game until around the hour mark when they had Ollie Chamberlain dismissed and from then on it became an uphill battle.

It only took four minutes for the deadlock to be broken. Rory Williams crossed to Sam Argent and he set up birthday boy Theo Lewis to slot home. Gosport had another chance after 12 minutes but Joe Lea’s shot was blocked by Shane White following another run from the lively Williams who soon after drove a 20 yard free kick just over.

Town struggled to create chances with the home side mopping up most of the threat. Lewis Hall saw two efforts miss the target before the first corner to the visitors came on 38 minutes but came to nothing. The nearest the Peacocks were to a breakthrough was two minutes before half time when a free kick from last season’s leading scorer Andrew Neal went narrowly over.

The Peacocks began to ask more questions of Borough after the break. Matt Wright was introduced six minutes in and after he had been dragged down on the edge of the box, Neal had another chance with a free kick but blasted it over the bar.

Town’s task remained difficult, but it was made even harder after 61 minutes when Chamberlain, having been booked in the first half, fouled George Barker and was dismissed for a second yellow card. The hosts wasted no time in taking advantage, adding a second goal after 65 minutes, with Williams and Argent again involved in the build-up but this time it was Barker who applied the finishing touch inside Lloyd Irish’s left-hand post.

Despite continuing to pressure Town were out of luck in front of goal. Wright put Neal clear on the left and with Patrick O’Flaherty advancing, the striker’s effort went wide of the far post. Dan Sullivan seized on a loose ball, but his shot was straight into the keeper’s midriff while another effort from Neal lacked the venom to test O’Flaherty and a free kick on the edge of the area was drilled over by Ed Palmer.

Another Lea strike was blocked by Palmer and Irish held Argent’s shot as the home side stretched Town on the break before Taunton’s best chance of the game came after 82 minutes, a defender missing Palmer’s long clearance and Neal capitalised, switching onto his right foot but unfortunately seeing his shot hit the post. The game was then made safe in the last minute of normal time when Argent fed substitute Marley Ridge in the middle and his curled finish gave Irish no chance, confirming Town’s heaviest opening day defeat in 38 years. 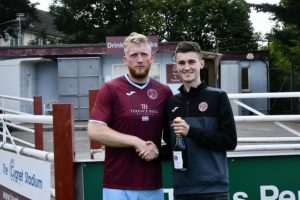