The Peacocks gained their first League win on the road this season with a gritty victory in Hampshire. Although Town were well below hitting top gears, they did enough to claim the points against a Farnborough side who defended bravely but were undone by Owen Howe’s goal after the break.

Yet again the visitors named an unchanged team, but they were somewhat slow out of the blocks and it was the home side who enjoyed the early possession without causing any damage. A free kick from Courtney Fearn was blazed over and Reece Miller saw his shot deflected for a corner after a long throw from Bradley Pearce had been headed clear. Ezra Ikebuasi then moved in from the right to drive an effort narrowly over the top.

The hosts had another sniff when Miller found Connor Cullen in space but after taking a touch inside his shot was comfortably held by Lloyd Irish before the Peacocks finally started to look more effective in the opposition box. A bout of pressure saw Joe Guest curl a shot into the arms of Liam Beach, then Ollie Chamberlain’s pass put Dan Sullivan away on the left and when Beach blocked his attempt, Chamberlain’s shot from the rebound towards the open net was kept out by a diving Farnborough body at the expense of a corner from which Ben Adelsbury headed over.

Beach again came to the rescue after diving to clutch Chamberlain’s strike from the edge of the box before Farnborough threatened on the break, Miller’s shot being deflected wide and John Oyenuga’s 20 yard effort proving a routine stop for Irish. The clearest chance of the half for Town arrived with ten minutes left to play, Sullivan teeing up Chamberlain for a shot from 18 yards which was angled across Beach but unfortunately hit the base of the post.

This was followed moments later by the best opportunity for the hosts, Ikebuasi releasing Cullen on the right, however Irish made a superbly timed tackle to win the ball off the Borough striker. Play continued to swing from end to end as Hill’s strike from the right side was pushed wide by Beach before a handball was given just outside the box at the other end but Andrew Blake’s free kick hit the wall.

Town emerged for the second half knowing they needed to sharpen their efforts going forward but initially they remained out of luck as skipper Nick Grimes hooked over from close range and Jay Foulston’s cross rolled just wide of the far post. The home side also continued to remain off-target, Blake playing a free kick square to Fearn who blasted high and wide.

Howe was introduced for Hill on the hour and he capitalised on a slip to cross into the middle, the clearance falling to Sullivan whose shot was blocked. Town saw several efforts obstructed by the home defence, but they were unable to stop what proved to be the winner after 72 minutes. A break from Sullivan saw him feed Toby Holmes and when his strike was again blocked, the ball was cleared out to Adelsbury. He found Jamie Short on the right and his centre was swung at by Howe who failed to connect but it was second time lucky as he quickly tucked a left-footed shot beyond Beach and inside the post to the delight of the Town support on the terraces.

Beach prevented a quickfire second, saving well from Chamberlain after the Town midfield man had met Holmes’ cross. Short and Sullivan linked up in the box and although the former’s effort was poked past Beach it didn’t have the legs to reach the net while Sullivan weaved one way, then another in the area before having his shot…yes, you guessed it, blocked as Town searched for a killer second.

Meanwhile, despite some late pressure, Farnborough were unable to conjure up a clear opening as they tried to salvage a point, their cause not being helped by the dismissal of Louis Dunne a minute into stoppage time who was shown a second yellow for a trip on substitute Lee Lucas, making a welcome debut for the Peacocks after recovering from a pre-season injury. When Nathan Wood’s corner was cleared, the whistle ended the game which overall was not of the greatest quality but most importantly keeps the new-look Peacocks unbeaten this season. 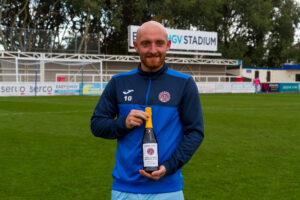