The visitors were undone by a goal just after the break as they suffered defeat on the Kent coast in what is believed to be the longest distance the Peacocks have ever had to travel for a midweek League match. It wasn’t the best start to 2023 for Town who were playing only their third National League fixture in six weeks. However, they could have been making the 250 mile homeward journey (probably more in light of some diversions due to motorway closures) with some reward after missing a penalty with around 15 minutes remaining.

With Lee Lucas absent due to illness and Dan Ball also struggling with injury, the Peacocks gave Dylan Morgan a start while Lloyd James returned in midfield after missing his side’s last competitive action at Weymouth two weeks previously. And the lack of match sharpness from Town was evident in patches throughout the contest. An uneventful start was interrupted by two quick bookings, one for each side, before Town threatened when Morgan found Ollie Chamberlain out wide but despite beating his man, he found the side netting with the cross. Chamberlain then blasted a shot over the top as both sides tried to adapt to the swirling wind and heavy drizzle.

After Dover won the first corner of the game on 16 minutes which Town defended well, the best opportunity of the opening half arrived moments later when Jordan Higgs’ long pass put Noah Carney clear who squared to Alfie Pavey in the middle. Jack Bycroft proved his worth though by standing strong and making the block. Carney was again found in space, but his tame effort was easily gathered by Bycroft before the Peacocks claimed their opening corner which led to Nick Grimes’ driven cross back in being held by former Brentford and Gillingham keeper Stuart Nelson as Nat Jarvis waited to pounce.

The rest of the half saw little progress from either team in making a breakthrough. A James free kick went straight to Nelson while for Dover, Pavey’s header following a swift break from Luke Wanadio took a deflection for another corner. That all changed four minutes into the second half. After Wanadio’s cross had flashed across the face of goal, the hosts claimed the crucial goal when a ricochet in the area came back nicely to Pavey who turned to fire home off the underside of the crossbar from close range as the Town defence were caught off guard. The goal injected confidence into the Whites who were looking to recover from their defeat to bottom markers Hungerford at the weekend, and they created another opening after Alfie Paxman’s ball down the left put his teammate clear (visibility not good in the conditions to identify) and his cross reached Luke Baptiste who saw his effort blocked.

Jake Wannell headed wide of the far post from a James free kick as Town searched for the equaliser which was given added impetus with a double substitution just past the hour, Nick McCootie and Dave Sims-Burgess replacing Jarvis and Ross Stearn. The final switch soon followed, with Joe Budd taking over from Joe Guest with 19 remaining but the cutting edge remained lacking. Sims-Burgess set up Morgan for a strike which was too high before Town were handed a golden chance to restore parity after 73 minutes. Foulston weaved one way and the next inside the box and went down, the loose ball being collected by Wannell who was adjudged to have been tripped as he looked to drive forward. Whether or not it was a foul or more pertinently whether it was inside the box was certainly contentious from Dover’s point of view as they appeared dumbstruck, then livid with the consequent penalty award. The spot kick from James though was parried by Nelson and when the rebound fell to the Peacocks’ No 8 he sliced it over the top to the dismay of the small travelling contingent behind the goal.

Dover continued to threaten on the break as they found gaps in behind but couldn’t add to their tally. A looped pass over the top from Higgs found Chike Kandi who was denied by Town’s Man of the Match Bycroft while the Peacocks huffed and puffed without success. Foulston’s free kick was cleared as far as James who fired over and a run from McCootie saw a shot deflect to Nelson. Another breakaway from the hosts saw Kandi’s cross whistle across the face of goal before a similar scenario at the other end, McCootie drilling the ball across, but no yellow shirt was there to capitalise and that was the end of Town’s hopes. The evening deteriorated further when Foulston took a kick on the top of his foot and had to be helped off, leaving the Peacocks down to ten men during the dying stages of stoppage time which nearly concluded with a second for Dover, Kandi latching onto a clearance, but Bycroft did what he does to foil the effort.

The final whistle blew immediately on what was a disappointing trip to the far east. The Peacocks showed their rustiness against a side without a League win in five games and know they will need to sharpen up for the fixture backlog looming in the next few weeks.

” No excuses, no excuses at all, we can do a lot better…….” watch the Match Reaction of Rob Dray on Peacocks TV HERE 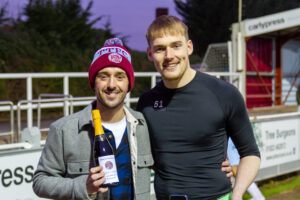 Jack Bycroft receives the Taunton Town Man Of The Match award from Andrew Clancy, Managing Director of Coreus Group who were match sponsors for the St Albans City game