A much-changed Town side eventually won through after a penalty shoot-out against their old rivals from North Devon. Fielding five debutants in their starting eleven, the Peacocks were ahead at the break before the home side drew level in the second half and were pressing for a winner when the whistle blew to take the tie straight to spot kicks, the same outcome as four years previously in the same competition.

With this Cup not top of the priority list for Head of Football Rob Dray, changes were made with a number of regulars rested and a couple out injured, giving the opportunity to introduce four players to the squad from our development partners Bridgwater and Taunton College along with Will Buse and Khari Allen who have joined on loan from Bristol City until January. The first quarter of an hour was pretty tedious with neither side gaining much momentum on a straw-like playing surface, the only incident of note being treatment for Jared Lewington who received a bash to the face.

The first piece of action in the box went Town’s way, debutant Acey Mead’s cross half-cleared to Lewington whose shot was blocked, Dan McBeam following up to see his effort saved by Jack Arthur, but the flag had already gone up. The hosts had their first chance when Javan Wright’s cross was scooped over the bar by former Peacock Craig Duff before a free kick 20 yards out gave captain for the night Ben Adelsbury a sight of goal at the opposite end, however Arthur did well to push his strike around the post for the visitors’ first corner from which Adelsbury nodded wide.

Bideford had a good chance to open the scoring when Duff lifted a pass over the defence to play in Callum McGhee on the right, but he fired wide of the far post. It was the Peacocks though who drew first blood four minutes before half time when Zac Smith’s corner was headed back into the middle by Lewington and Adelsbury reacted to take a touch and hook a volley over the line. Town’s debutant keeper Will Buse, brother of former Peacock favourite Matt, then showed a safe pair of hands to collect Jamie Down’s shot to preserve his side’s advantage at the interval.

The returning Ioan Richards was unable to direct his header on target from Allens’ free kick when play resumed before the hosts began to find more space going forward without creating a clear opportunity, Buse holding a McGhee cross on another break. The new loan keeper was unable to do anything about the Robins’ equaliser though after 72 minutes, Wright finding Mattie Buchan down the left and he cut inside to curl a fine effort over Buse into the far corner of the net.

A strong run from Buchan then released Wright who saw his cross-shot parried away by Buse at his near post as Bideford began to increase the pressure on the Peacocks’ goal. There was some respite when Smith had a long range free kick caught by Arthur before Lewis Wilson curled an effort wide and Buse made another smart save, diving to palm away a strike from Alex Byrne. Ollie Chamberlain and Dan Sullivan emerged off the bench with two minutes left with penalties in mind and apart from a late scare when Byrne’s free kick from a dangerous position hit the wall it went to a shoot-out.

Chamberlain and Joe Charles confidently converted before Sullivan saw his effort saved. Buse then kept out George Tucker’s attempt and Adelsbury blasted home his kick to give Town the advantage, further enhanced when Byrne dragged his penalty wide. McBeam and Aaron Taylor were both successful which left Buse to thump home his spot kick and steer the Peacocks into the next round on a 4-2 margin.

“We were a real mix and match, our shape was superb……” watch Rob Dray’s Match Reaction along with debutant Lewis Smith on Peacocks TV HERE 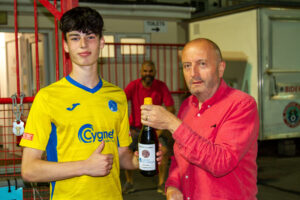 NB Due to Lewis’ age, his father was present when the photo was taken