A second half fight back from the Peacocks was not enough to prevent the home side from progressing into the next round of the FA Trophy.

Aveley started at a lively pace and only 6 minutes had been played when a Wyan Reid shot was saved by Taunton keeper Lloyd Irish and two minutes later George Sykes, who had such a fine game at the Cygnet Health Care Stadium fired over from a good position. It was no surprise when the home team took the lead after 14 minutes and it was a shot by Alex Akofri, who had also opened the scoring on Saturday.

After the long journey Taunton took time to settle on the 3G pitch and after 23 minutes Aveley’s pressure told once again when another of Saturday’s scorers Jason Raad ran from the halfway line and put in a shot which was too good for Irish. Taunton rallied before the break and a Ryan Brett corner was safely held by home keeper David Hughes, who made a fine save right on half time from Jamie Price’s overhead shot.

Aveley started the second half well and after 53 minutes Sykes had a shot which was straight at Irish, but Taunton began to play and on the hour skipper Matt Wright had a shot which went wide. Just three minutes later Ryan Brett’s free kick was well saved by Hughes, who had a fine match.

Aveley continued to look dangerous and after 74 minutes Sykes had a shot well saved by Irish. Three minutes from time Jamie Short had a shot well save by Hughes and two minutes later Wright got on the end of a cross by Short but it went wide. Taunton finally got their reward two minutes into injury time when sub Jack Rice bundled the ball home from Wright’s pass but it proved to be too little too late and it was Aveley who took their place in the next round. 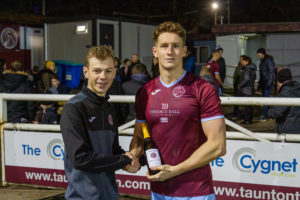