The return of football to the Cygnet Health Care Stadium after an eight week absence was hardly worth the long wait as the Peacocks slipped to defeat against their play-off chasing visitors who secured the points with a second half winner. Although the result ended Town’s fantastic unbeaten home run of 27 League matches stretching back to August 2021, the most disappointing aspect was the performance especially in the final third where the hosts failed to post one effort on target.

Playing only their third game in January after a weather-impacted month, the Peacocks showed two changes from the side that had lost at Torquay in the FA Trophy. Centre half Jake Wannell had lost his appeal against his sending-off in that game so began the first of his three match ban, being replaced by the returning Dan Ball following injury, while Lee Lucas stepped back in instead of Ross Stearn.

An open start to the game saw the Saints foraging down the left flank while Zac Smith’s driven cross was safely held by City keeper Dylan Berry. The visitors’ first opening came with a free kick from the right and when Ryan Blackman’s set piece was cleared,  the ball fell to Kyran Wiltshire whose goalbound strike hit a Town body. The Peacocks won their first corner after 12 minutes which came to nothing. This trend sadly continued for the remainder of the game, as St Albans began to emerge as the more cohesive unit, finding space down the left where Zane Banton and Tafari Moore were linking up well, one such move ending with Jack Bycroft holding Moore’s prod into the box as he attempted to find Shaun Jeffers.

Despite posing a greater threat, City only forced Town keeper Jack Bycroft into one proper save during the first half when he clawed away a Mitch Weiss strike from the edge of the box.  Berry similarly had the minimum to do at the other end. There was hope when Lucas played in Nat Jarvis but Berry blocked the attempt and it wouldn’t have counted anyway with the flag up for offside before a Jay Foulston free kick was cleared as far as Joe Guest whose delivery back into the box saw McCootie attempt a backheeled flick which travelled wide.

Attacking the Showtime Attraction End for the second half, Town began well enough. A challenge on Ollie Chamberlain produced half-hearted penalty appeals while a Foulston corner found an off-balance Nick Grimes who placed his header well wide of the target. Any promise proved a false dawn though as City struck to break the deadlock six minutes in. Banton and Moore again combined to cut open the Taunton defence down the left, with the former teeing up the latter to place a shot into the far corner beyond the reach of the diving Bycroft. A well-worked goal which on the balance of play the visitors deserved.

City again threatened when Town lost possession, Devante Stanley breaking down the right and Weiss’ cross being caught by Bycroft before another penalty shout for the hosts was ignored when Smith went down as he moved in from the left touchline. Stearn took over from Lloyd James just past the hour as the Peacocks continued to labour for an opening. A Lucas free kick reached the back post where McCootie stretched to reach but it was too high, and he was unable to direct his header at goal.

A double switch with just under 20 minutes remaining saw Dave Sims-Burgess and Dylan Morgan replace Jarvis and McCootie but chances remained scarce at both ends. Jeffers sliced a volley wide and Wiltshire fired over the top for the visitors who tailed off for the final stages. However, Town could not take advantage, with any promising move falling away and City competently defending any ball into the danger zone. A further six minutes of stoppage time made no difference, with a further handball appeal for a penalty dismissed and Smith volleying over the angle after Foulston’s corner had been cleared.

The undefeated home record had to end sometime but the home fans in the 807 crowd will be more disappointed that it concluded with a punchless display rather than going down in a blaze of glory. No time to dwell on this one though with the heavy schedule ahead. The Peacocks have 56% of their fixtures to play in 33% of the season and they know they will need a big improvement over those games to maintain their Step 2 status. 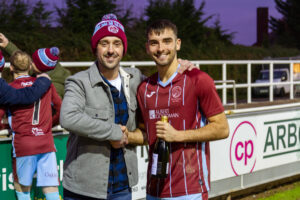