On occasions the thought of writing a report on the 90 minutes just witnessed is about as appealing as cutting the Cygnet’s pitch with a pair of nail clippers. This is such an example as the Peacocks conceded in the final ten minutes on a miserable night at Arbour Park. For the most part of the contest it looked like a nailed-on goalless draw, with the visitors missing what chances came their way and Slough creating even less but they did take the one that counted to hand Town their first defeat in five matches and only a 5th goal conceded in eight games.

The Town line-up showed two changes from the Hungerford game, with Nick McCootie coming in for Nat Jarvis and Joe Budd replacing the absent Lee Lucas. After an impeccably observed minutes silence for Queen Elizabeth, the game began in drizzly rain which got heavier as the half progressed which led to slippery conditions on the artificial pitch. Saying that, the Peacocks started well enough as they bossed the opening quarter. Dave Sims-Burgess turned to fire wide and Nick McCootie’s drive was blocked by Joe Dandy before Jay Foulston won the ball on the edge of the box to find Zac Smith who couldn’t get a shot away, with the clearance being drilled just over the bar by Budd.

The Peacocks continued their pressing but will rue missing the clearest chance of the game on 15 minutes. McCootie found Ollie Chamberlain on the right and his low cross was met by Sims-Burgess who contrived to plant his effort over the top from inside the six yard box. Jake Wannell’s curled ball into the area then found Smith who set up Budd for a strike which travelled wide while Sims-Burgess also missed the target with another shot but for all their intent, Rebels keeper Rhys Forster did not have a save to make.

Over half an hour had gone before the hosts offered their first attempt, Ben Harris flicking a long ball on to Johnny Goddard who couldn’t connect, allowing Jack Bycroft to safely gather. Slough then went on to have the better of it up until the interval, with a break down the right flank seeing Goddard find Aaron Kuhl whose shot was blocked by his own player Elliot Benyon. George Wells blazed a cross high and wide for the home side, summing up a first half of minimal quality and entertainment, despite the tannoy announcer opining otherwise.

With the heavens continuing to offload, conditions were no less easy after the break. Slough won the first corner of the game six minutes into the second half and from Matthew Lench’s delivery a downward header from Harris was easy pickings for Bycroft. A long throw from Guy Hollis, often employed during the game, then fell for Harris to fire a shot into the side netting. Town responded through Chamberlain who again proved a bright spark for his side but after cutting in his shot failed to trouble Forster as it flew wide. The Peacocks immediately made their first switch of the night, with Jarvis replacing Sims-Burgess before Slough failed to make the most of an opportunity, Lench crossing from the right for Harris to head well wide of the goal.

The Peacocks might have also done better from their first corner on 61 minutes. Foulston’s flag kick was nodded back across by Nick Grimes, but Jarvis flashed his header the wrong side of the post. Chamberlain then burst through from midfield to screw an effort wide of the near post as the action remained largely tedious. Ross Stearn replaced McCootie with just under 20 to go and after two corners had been and gone for Slough, Town had another sniff when Smith passed to Budd who was free on the edge of the box. However, in keeping with the theme, he scuffed his strike wide.

When Goddard fired high over the top, a goal seemed unlikelier than ever as the match entered the final ten minutes. Not the case. It was almost too easy for the hosts to execute the single killer touch of the evening, Lee Togwell in space on the right to find Benyon at the far post who volleyed home unchallenged. Dylan Morgan came on for Smith straight after as Town piled forward in the latter stages. Forster could actually claim to make a save as he clutched Budd’s shot just outside his near post while Stearn’s free kick, awarded after Jarvis was pulled down, hit a stray leg in the wall.

Urged on by a good number of travelling supporters considering the 290 mile round trip, four minutes of stoppage time saw the Peacocks continue their assault, Foulston teeing up Lloyd James whose shot was blocked before the added time was extended yet further after treatment and the subsequent substitution of Benyon. Two corners at the death even saw Bycroft venture upfield but they came to nothing, and time ran out. A very disappointing result against a side that the Peacocks were more than capable of beating but again they were found wanting in the final third. The defence cannot do it on their own all the time.

“We probably smelt a bit of blood in the first half an hour and we probably should have finished the game off again……..” watch Rob Dray’s Match Reaction on Peacocks TV HERE 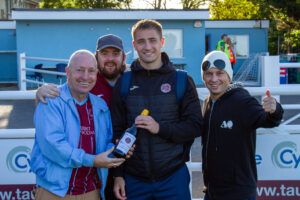