An amazing day capped off an amazing season as the Peacocks scored a late winner to claim the Southern League Premier South title by five clear points and promotion to the heady heights of the National League South, the highest level the club will have played at in their 75 year history 🥇 The match itself was played under the mental weight of the ‘what if’ scenarios affecting a dramatic final day of the campaign, resulting in a rather scrappy and nervy affair, but anyway, who cares! The result was the only thing that mattered and Town, as they have done so often in a far from straightforward season, plugged away to secure an outstanding 19th win from their last 22 League matches, ever since I started using the ‘lucky’ 360 South West pen (thanks Ian!)

Arriving early at the Cygnet Health Care Stadium saw an empty stadium apart from staff and a calm yet anticipatory atmosphere tinged the air. How that changed in the space of a few hours as a huge crowd of 2,303 people filed through the turnstiles, filling the terraces, seats, and any other accessible vantage points to gain a view of the 90 minutes of history about to unfold. Note to all those present – please come again! An hour before kick-off also saw a presentation made to coach Michael Meaker who has officially retired from playing at the tender age of 50 – thanks Meaks 👍

The Peacocks’ team showed just the one change from the derby victory at Tiverton five days previously, the influential Ross Stearn making his first start since dislocating his shoulder a month earlier in the League Cup Final and Joe Budd dropping to the bench. Town were also without top scorer Toby Holmes whose wife was due to give birth imminently. Farnborough, meanwhile, with one eye on the impending Play-Offs, had three players absent who had started their last match against Hartley Wintney.

A good early run from Gethyn Hill into the box was halted at the expense of Town’s first corner but it was generally a cagey start to proceedings which were halted soon after to allow treatment for Jay Foulston as home fans sang the praises of Hartley Wintney after news came through of their early goal against Hayes. Farnborough then showed for the first time down the right, but Frankie Sutherland’s cross was cleared while a free kick from Harry Cooksley was headed over the bar by Jack Ball. Little of note though in the first quarter as the Peacocks took some time to settle. When they did get the ball into the box nothing tended to fall. Jake Wannell’s cross was laid off by Joe Guest but just out of range for Jared Lewington to capitalise, while another deep cross from Wannell saw Stearn just unable to control and keep the ball in play.

Stearn’s effort was blocked at close range and the follow-up from Lewington also hit an opponent as momentum slowly started to build towards the Town end which saw the Peacocks grab the lead seven minutes before the break. A Foulston corner was headed clear but only as far as Guest whose drive back into the mix was met by Stearn, leaping majestically to direct a header into the corner of the net, keeper Jack Turner rooted to his line as the fans raised the roof. With Hayes now trailing by two goals, could I, along with all other Peacock fans dare to dream? The hosts continued pressing, a break seeing Zac Smith’s cross just being too high for Hill to get on the end of while Wannell will be disappointed he didn’t do better from a Lloyd James corner, heading a good chance wide of the target.

With 45 minutes up, Farnborough reminded Town that they were well capable of spoiling the party when they equalised. A free kick from the left was cleared to Adam Martin whose forward header picked out Paul Hodges. The striker turned neatly to fire in a low shot which Will Buse was unable to hold, and Borough skipper Courtney Fearn was on hand to stab into the net to leave it all square at the break.

As it stood, the one point Town required looked relatively safe, with the visitors, although neat in possession not really causing too many issues and with Hayes still losing by two goals. But as we all know, nothing can be taken for granted where football is concerned. With Borough having made two substitutions at the interval, the Peacocks began the second half well, forcing four corners, one of which from James saw Ben Adelsbury prod wide after the visitors failed to clear. A handball from a James pass then gave the Town No 4 the opportunity for one of his specials from the free kick just outside the box, however on this occasion his effort found the wall. Taunton were gaining the upper hand which they needed to when the terraces learnt that Hayes had pulled a goal back. A Foulston corner saw Lewington’s volley blocked, the rebound finding Wannell who also had a shot hit a body before squeezing enough room to post a strike which Turner safely gathered. Lewington then drilled high and wide following Wannell’s deflected low centre, however cohesion was proving problematic, both due to the deceptively gusty wind and no doubt the realization of the occasion.

Nerves became more frayed after word came through that Hayes had drawn level before a dangerous move thankfully ended benignly, Selim Saied moving down the left and squaring to Youel Emmanuel who found Rob Howard out wide, his cross deflecting off Guest to safely reach Buse. Budd replaced Lewington with just under 15 minutes remaining, the home fans in full voice as they urged their team forward. A fine Town move involving several players culminated in Guest finding Budd who moved inside to have a strike blocked while Hill headed wide from a Foulston corner.

Into the last few minutes 😬 The visitors were not settling for a point though. Some long throws from Martin were well defended by the Town rearguard while Hodges could only scoop a soft attempt into the arms of Buse after Saied had squared the ball across the box. The whole season was finely balanced, as everyone tried to keep the unthinkable of a late Borough goal coupled with Hayes scoring a third out of their minds. All that nervous energy erupted with three minutes remaining. James received Budd’s pass on the left and glanced one way but played the ball the other, a fabulous piece of skill to tee up Foulston who arrowed a beauty into the far top corner amidst scenes of delirium both on and off the pitch.

Ross Staley and Harry Warwick replaced Stearn and Hill in the last few minutes which were lengthened by three minutes of stoppage time. The visitors’ last hope came when Cooksley’s cross was overhit and travelled out. The final whistle saw scenes probably never witnessed before at the Cygnet as hundreds of fans spilled onto the pitch, sheer elation taking over as supporters, management, players, and staff alike celebrated and some. Captain Nick Grimes was held aloft as ‘We Are The Champions’ blared out over the tannoy and once things had calmed (a little) it was time for the team to receive their winners’ medals and the Championship trophy, bubbly spraying everywhere as the most wonderful of seasons came to an end. The title win means the Peacocks have now finished 1st, 2nd, and 1st in their last three completed seasons, an awesome achievement and even more astounding this season given the longest absentee list during the campaign in many a year for various reasons.

“It’s going to take a little bit of time to sink in, it was a great day, it was an unbelievable day…….” watch Rob Dray’s Match Reaction on Peacocks TV HERE 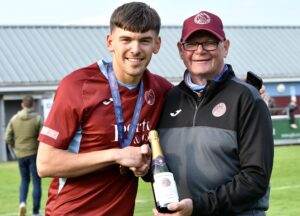