Jay Foulston’s fabulous free kick after just five minutes settled this cagey derby contest as the Peacocks took another giant stride towards claiming the Premier South title and the one automatic promotion slot on offer. The occasion overshadowed the game to a large extent, with Town never really capitalising on their great start while the hosts upped their game in the second half without overly troubling the solid Peacock defence.

Town showed two changes from their last outing against Yate six days earlier, with Jake Wannell stepping back in after missing the last three games while Jared Lewington swapped places with Toby Holmes. It was a carnival atmosphere at Ladysmead, with its largest crowd for 21 years of 1546 consisting of a substantial and vocal Peacocks contingent who appeared to easily make up more than half the attendance, and they had early cause to celebrate with a goal five minutes in. Joe Guest was brought down just outside the box as he moved in from the left and Foulston curled a beauty 😍 around the wall and in off the underside of the crossbar.

The visitors went on to dominate the opening quarter of the game as they pressed Tiverton back but were unable to carve out another clear chance. Gary Warren’s back header was chased down by Gethyn Hill, but keeper Lewis Williams survived and then Austen Booth did well to divert Joe Budd’s deep cross away from Wannell to concede a corner. Another flag kick saw Williams punch clear back to Foulston who drove wide while Wannell headed a further corner over the top. It wasn’t until the 26th minute that the Yellows posted an effort on goal, Louis Morison finding Chris Shephard inside whose shot was nowhere near the target. The home side came considerably closer to drawing level though just past the half hour when an attack down the left saw Jordan Lam put a ball into the path of Morison, however Will Buse made a brilliant save to palm the strike onto the bar and the ball was scrambled clear.

A Shephard corner was cleared to Dan Hayfield who fired a volley just over the top to end the half. So far so good. The second half nearly began badly for the Peacocks when a free kick was played short by Morison to Lam, and his cross was met by Warren for Buse to touch onto the post for a corner. Another free kick was fed to Hayfield whose shot deflected for another corner as the home side started to increase their efforts. Holmes replaced Lewington with ten minutes of the half played and was close to making an immediate impact, latching onto a long ball and after getting the better of Warren was left with Williams to beat, the Tivvy keeper coming out on top as he blocked Holmes’ prod with his leg. Hill then cut in from Lloyd James’ lofted pass but had his shot easily held by Williams as the Town fans clamoured for a second goal.

Few might have thought Ross Stearn would reappear this season following his shoulder dislocation against Royston four weeks earlier but the midfield talisman confounded any such ideas when he replaced Budd after 66 minutes before another opening came Tiverton’s way when Shephard’s cross wasn’t cleared, and it fell loose to Lam who fired the wrong (or right from the Peacocks’ view) side of the post. Hill fired an effort well over the bar while a great move involving Stearn and Hill ended with Guest’s shot being blocked although the flag was already raised.

Tiverton utilised all three of their substitutes in the final 15 minutes or so but there was to be no grandstand finish as the Peacocks’ uncanny knack of just doing enough to win games whilst not at their best continued. Stearn fired a strike wide, and Holmes was denied by Warren’s block while Buse clawed away Hayfield’s free kick from the left at the opposite end. Four minutes of stoppage time were safely negotiated to ensure Town remained top of the table by three points. The celebrations from players and fans alike at the end said it all and a nervy few days now await going into what could be one of the most momentous weekends in the club’s history.

” It was a hard game today, we weren’t at our best but I keep saying it, they just find a way….” watch Rob Dray’s Match Reaction on Peacocks TV HERE 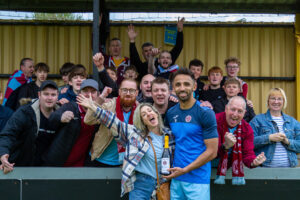