Town maintained their impressive Southern League record at the Cygnet Health Care Stadium this season with a win over basement team Wimborne. The Peacocks have now won nine of their eleven home fixtures, with only one defeat, and their latest success proved fairly routine against a Magpies outfit which played better football than their position would indicate.

Several team changes were necessary from the previous weekend’s visit to Dorchester, with Zac Smith absent with a painful toe, Jared Lewington suspended and centre half Ioan Richards pulling out before kick-off due to a sore quad muscle. Ben Adelsbury, Joe Budd and Gethyn Hill were all drafted in to replace, and it was Hill who posted the first effort of the game with a 20 yard lob wide of the target.

The visitors, fresh from a 6-0 county cup victory in their most recent outing, responded immediately as they enjoyed a decent opening spell. Peacocks’ keeper Will Buse held a shot from Lewis Beale before the Magpies won their first corner, Dan Bartlett crossing to Louis Kellaway who headed wide at the back post. Budd then earnt the Peacocks their opening corner which produced a well-worked first goal after 13 minutes, with Jay Foulston delivering to the near post where Ollie Chamberlain ran in to direct a firm header into the unguarded net.

Wimborne came close ten minutes later when Jez Bedford drilled a strike into the side netting from just outside the box before their defence went AWOL on the half hour when Town added their second of the afternoon. Foulston’s diagonal pass found Hill 35 yards or so out and after evading Harry Morgan’s challenge, the Peacocks striker meandered effortlessly through a static Wimborne backline to wrongfoot Gerard Benfield and roll the ball into the left-hand corner.

Hill then teed up Ross Stearn for a shot which flew over the top at the Travis Perkins End as Town searched for a third while Buse still had to be alert at the opposite end as he clutched a low Curtis Young shot from the right side of the area. The half ended with Lloyd James threading a fine pass through to Budd on the right, but his strike cannoned off Benfield’s leg before the hosts came mightily close to making it 3-0 four minutes after the break. Hill lofted a ball over the top which found Stearn who prodded past Benfield, the ball taking a deflection off the keeper’s foot to hit the post.

Town’s positive start to the second half continued when Chamberlain beat two men on the left, his cross coming quickly to Stearn who couldn’t get enough pace in his effort which was cleared, then Stearn’s free kick was held by Benfield after Toby Holmes had been fouled. Holmes soon came back to haunt his former club when he extended the Peacock’s lead with his 15th goal of the season on 56 minutes. James’ ball down the right saw Holmes rob Billy Maybury and advance into the box before directing a shot across Benfield into the far corner via a deflection off Callum Chugg. The Magpies quickly pulled a goal back just a minute later, Bedford nodding down to Morgan on the left side of the box and the Wimborne skipper held off the defence to beat Buse inside his near post.

Despite their perseverance there was little likelihood of this goal being the springboard for a comeback from the visitors. The last half hour of the contest saw the Peacocks look to restore their three goal cushion and repeat the scoreline from the first meeting of the sides on the opening day of the season. Hill headed narrowly wide when he got on the end of Foulston’s free kick, then another set piece saw Foulston himself curl his effort wide. The Magpies’ attempts were less than accurate, Bartlett blasting a strike wide and Morgan ballooning over from a short corner routine although they did register another attempt on target when Buse safely held Morgan’s shot.

After a delay for treatment to Nick Grimes and Jamie Henry following a clash of heads, Town made their only change of the game with Dan Sullivan replacing Holmes. The final stages were punctuated by the Peacocks just failing to convert several opportunities. Stearn’s cross in from the right was inches ahead of both Sullivan and Hill, then Sullivan’s ball across carried too much pace for Stearn to capitalise and Budd’s centre was cleared over the bar by a Wimborne defender in stoppage time. Another win for the Peacocks who did not need to go up the gears to see off a plucky Wimborne team, the victory making it ten competitive games unbeaten in front of the second highest crowd of the season at the Cygnet.

” We’re in a good place, the lads have acquitted themselves really well today…” watch the Match Reaction from Rob Dray on Peacocks TV HERE

Match highlights on Peacocks TV can be seen HERE 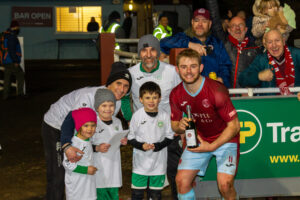 Joe Guest receives the Taunton Town Man Of The Match award from Charlie Rutherford and his three children Charlie, Albie and Lyla along with Chris Strand from Ruishton Under 9’s who Charlie Jnr plays for and who were Matchday Mascots for the game. The three children led the teams onto the pitch as it was also a special afternoon to help publicise the Sunshine Glioblastoma Trust, mum Katherine having passed away from the disease. To read more and to donate to fundraising please click HERE