The Peacocks gained a valuable point at their Buckinghamshire promotion rivals. Town started the better side when new loan signing Lloyd James stood over a set-piece but hit his effort just over the crossbar. Moments later, the Generals had a chance of their own when Jordan Gibbons found himself in space about 25 yards out but his effort did not trouble Will Buse as it sailed over.

A flurry of set pieces then went in favour of the Peacocks, the most notable being a short free-kick from Jay Foulston which found James who had a shot but his curling effort was headed away from danger. It was the Peacocks who broke the deadlock just after the half-hour mark when a Ross Stearn cross was turned in by the slightest of touches from Jared Lewington to give him his 8th goal of the campaign. Soon after, the Peacocks had the ball in the net again when Toby Holmes darted through and slotted the ball in at the near post but the offside flag was up. Despite late pressure from the hosts, the Peacocks managed to hold the lead and take it into the break.

The second half started how the first had ended with Chesham piling the pressure on in search of an equaliser. With 48 minutes on the clock, Roddy Collins saw a low driven effort saved by Buse. This woke the Peacocks up as they went up the other end with Ross Stearn making good progress down the right before finding Jared Lewington, but his effort was matched by Beasant who made the save. Soon after, the Peacocks were sure they had a second when Toby Holmes beat Beasant to a cross at the front post and shot from a narrow angle but the ball was clawed off the line by the Chesham defence. Despite appeals, the assistant referee was sure it had not crossed the line.

It was then Chesham who had the better spell when Brandon Barzey used his trickery to dance into the box and get a shot away but his attempt was saved by Buse. The pressure from the hosts finally paid off for them when Karl Oliyide received the ball on the edge of the box from Kylian Kouassi before finding the net with a low effort to even the scoring. Moments later the Buckinghamshire side hit the woodwork when a deep corner fell to the feet of Collins who lofted the ball towards the back post but he could only find the crossbar.

The Peacocks held firm despite a spell of corners which were dealt with by the defensive line. It was Town who came the closest towards the end of the game when a cross into the box found Ross Stearn but his header was glanced across the goal and wide. With the full time whistle blown, a draw meant the Peacocks made it six competitive matches unbeaten, keeping them within reach of the play-offs with some crucial games in hand to come.

“All positives from me, I think it’s a fantastic point……”  watch Rob Dray’s Match Reaction on Peacocks TV HERE

Unfortunately no club photographers were able to attend the game 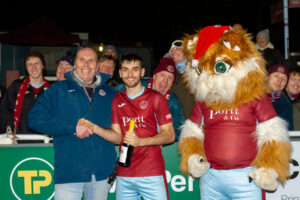