Ross Stearn’s first goal for the Peacocks was cancelled out by a Poole penalty as the second meeting of the sides this season again finished all square. The home side were on top in the first 45 minutes and led at the break but frustratingly a tepid second half display from Town saw the Dolphins look the likelier side to net maximum points. As it was neither side did enough to win.

The Peacocks welcomed back Ollie Chamberlain into the starting line-up for his first game in over a month following his injury sustained at Hendon, his dynamism having been sorely missed. After the visitors had posted the first attempt at goal, Will Buse comfortably gathering a shot from Jack Dickson, the Peacocks came close to making an early breakthrough with five minutes gone when Stearn’s cross dropped to Jack Veale at the far post, but Poole keeper Tommy Scott stood firm to parry the shot and then Veale’s follow-up effort.

The hosts began to gain some momentum as they looked to build on the previous week’s win over Gosport. The busy Stearn was felled 20 yards out and from his free kick, Scott dived to turn the ball wide, then Stearn again saw a half-volley parried and held by the Dolphins keeper after Chamberlain had nodded onto him. A Poole break ended with Will Spetch firing over the top but generally the activity was towards the visitor’s goal. A slip from Sam Jackson went unpunished when Stearn’s cross couldn’t pick out a teammate before Town made the breakthrough on 25 minutes when Scott failed to hold Jay Foulston’s effort from the edge of the box and Stearn nipped in to slot the ball over the line.

With just over 30 minutes gone Poole wasted a golden chance to equalise with their only real opportunity of the half, Tony Lee’s cross from the right being scooped over the bar by Luke Burbidge from close range. Chamberlain shot over and Toby Holmes headed a Ben Adelsbury cross wide as Town concluded a satisfactory first half.

The platform was there for the Peacocks to build on their lead after the interval, however their second half performance did little to warm the crowd on a very cold afternoon. Valid early appeals for a penalty after Declan Rose impeded Chamberlain were ignored by referee Fudge, the loose ball being fired wide by Jared Lewington, before Poole began to get on top.

Southern League top scorer Lee turned just outside the box to rifle in a strike which Buse got his fingertips to, then Dickson’s dink into the middle reached Lee who looked odds-on to find the net until Ioan Richards stuck his leg out to make a terrific block. The pressure paid off after 58 minutes when the Dolphins grabbed the equaliser. Foulston was penalised for a challenge on Dickson and Lee lashed home the spot kick. Funny how people see things differently, if that was worthy of a penalty, then so was the “tackle” at the other end ten minutes earlier.

Anyway…..boosted by the leveller, Poole had another opening soon after. The whistle went yet again after a visiting player had fallen over but Lee’s free kick hit the wall. Poole’s purple patch eventually faded, and the remainder of the game ebbed and flowed from end to end without either team finding the necessary incisiveness. Gethyn Hill’s overhead effort was too high following a Foulston corner before Buse clutched Dan Bartlett’s shot as Lee waited to pounce, then it was back to the Travis Perkins End for Chamberlain to deliver a left-footed strike just wide while Hill did well to muscle in from the right, only to fire straight at Scott. Overall a draw was a fair result, a point apiece being enough to keep both in the mix for a promotion shout come April.

“In all honesty we were by far the better side in the first half, second half we didn’t come out for the first 15 minutes…” watch Rob Dray’s Match Reaction on Peacocks TV HERE 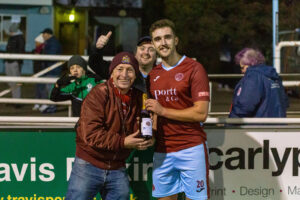