A much improved performance saw the Peacocks gain their first Southern League win in four games when they claimed the points against high-flying Borough at a murky Cygnet Health Care Stadium. After some substandard displays of late, Town were a far different animal against a Gosport side which were second in the table at the start of play. The hosts gained the advantage with an early second half goal before the visitors’ equalised in the final quarter, only for Town to regain the advantage a minute later to secure a victory which lifts them up to 8th in the table.

The opening quarter passed by without major incident with neither side able to stamp their authority on the game. Bedsente Gomis fired high and wide for Borough from a cleared free kick and Brad Tarbuck’s shot hit his teammate Dan Wooden while Gosport keeper Bert White’s clearance cannoned off Ross Stearn and could have gone anywhere and several corners were won, but chances remained scarce.

That all changed just past the half hour. Stearn, who had an excellent game in his home debut, won the ball and drove forward, crossing into the middle where Toby Holmes just failed to connect. Gosport didn’t deal with the danger, the loose ball falling to Ben Adelsbury whose shot deflected for a corner and from Stearn’s delivery Ioan Richards’ header bounced down to hit the underside of the crossbar. A defensive slip from Borough captain Matt Briggs a minute later then saw Jared Lewington through on the right side of the box, but White made a great block with his leg to keep the match scoreless. A trio of corners for the home side culminated in Lewington just unable to get enough power on his effort from close range to beat White and Jay Foulston fired a free kick over while Gomis sent another strike off target as the half ended level.

The second half was only four minutes old however when the Peacocks made the breakthrough. Adelsbury found Jack Veale wide on the right and after he managed to wriggle past Harvey Rew his cross was diverted into his own net by Briggs. The home side had further opportunities as they looked to cement their lead. After Stearn had been fouled, his free kick from just outside the area was driven through the wall and just about claimed by White as Lewington waited to pounce. A misdirected back pass from Harry Kavanagh caused White an anxious moment and then Stearn angled a shot narrowly wide of the post after Holmes had put him in.

Mason Walsh lifted a shot over the bar for the visitors and Wooden’s strike deflected for a corner but there was little menace coming from the Gosport attack with Will Buse hardly having a save to make. After a delay in play for treatment to Wooden who had to be substituted, Gethyn Hill came within a whisker of extending the Peacock’s lead, catching White off his line with a lovely chip from the right side, the Borough custodian managing to recover and tip the ball away onto the base of a post.

That piece of bad luck was magnified when Gosport drew level after 76 minutes, Walsh’s corner from the right being glanced home into the opposite corner by Matt Paterson at the near post. The Gosport celebrations though had barely died down before Town regained the lead a minute later. Hill got past his man on the right flank and centred to Stearn who teed up Lewington to lash a fine finish into the bottom corner of White’s net.

Borough’s cause was not helped when Gomis brought down Veale to earn a second yellow card with ten minutes left. The Town defence stood firm against some late pressure from the visitors, the best opportunity falling to Luke Hallett who flashed a shot just wide of the far post. The Peacocks though saw out five minutes of stoppage time to get themselves back on track with a thoroughly deserved victory and with everyone playing their part. 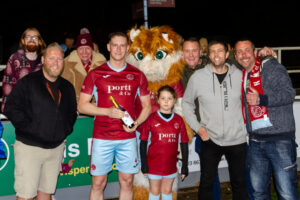