Things aren’t getting any better for the Peacocks at the Optima Stadium after they suffered their third defeat of the season to their hosts. After dismissing Town from both the FA Cup and FA Trophy earlier in the season, the Seagulls added a League win to their tally following a punchless display from the visitors who now slip down to 9th in the table.

There were two changes from the weekend trip to Yate with Jared Lewington replacing Toby Holmes up front while Ross Stearn came in for his debut and loanee Joe Budd dropped to the bench. The opening attempt came from the home side, the ball going from left to right across the edge of the box, ending with Jordan Bastin curling a shot wide. Town then had a decent spell without Weston keeper Max Harris getting his hands dirty. Jay Foulston fired a free kick too high after Josh Thomas had been fouled, then Dan Sullivan latched onto Stearn’s cleared set piece to blast another effort way over the bar. The Town No 10 came much closer soon after though when he received Jake Wannell’s pass and turned to drill a strike narrowly past the post.

The tables then turned as Weston began to gain the upper hand. Town keeper Will Buse was forced to turn aside an awkward strike from Lloyd Humphries and the ensuing corner was played short to Nick McCootie whose shot was blocked by Buse at his near post. The pressure continued when McCootie launched another drive just over the bar when Town couldn’t clear their lines before the hosts grabbed the lead after 20 minutes and it was all too easy for them. Prince Henry eased past Ben Adelsbury on the left and crossed to the waiting McCootie who could hardly miss as he tucked home from inside the six yard box.

Although the Peacocks were posing little threat in front of goal, they should have drawn level six minutes before the break. Lewington had earlier failed to connect with a Foulston cross, but the same combination nearly had better luck, Foulston crossing from the left, but the Town striker glanced his header the wrong side of the post. Lewington also saw a header bounce off his teammate Gethyn Hill and go out before Dayle Grubb and Scott Laird posted efforts which missed the target for the Seagulls who appeared well within their comfort zone as the half time interval arrived.

New boy Stearn fired a shot over the top when play resumed before another great chance went begging. Budd, who had only just replaced Thomas, fed Lewington who neatly sidestepped a defender and when his effort deflected out to the right, the incoming Stearn was unable to direct his volley into the inviting net. Buse made a comfortable save after James Dodd had made ground across the edge of the box before shooting but generally Weston were content to soak up Town’s long ball approach and break on the counter.

Another opening came and went when Stearn dispossessed a defender and linked with Hill, but his attempt was scooped wide of the mark before a break from Weston nearly saw them add their second, McCootie’s cross reaching Alfie Moulden whose strike was kept out by a great block by Nick Grimes. Humphries saw another shot fly over and as Town continued to lack creativity Holmes was brought on for Adelsbury for the final 20 minutes or so. Despite such an array of strike power the Peacocks only managed to trouble Harris once and what a save it was. Eleven minutes were left when Foulston was brought down on the left, Stearn floated the free kick in, and Holmes’ flicked header was clawed away at full stretch to prevent the equaliser. The irony of the Seagulls keeper being announced as his side’s Man of the Match for making one save all evening was not lost on the travelling support.

Town hopes further dimmed with five minutes remaining when Budd received his second yellow card of the evening and the mandatory red after he pulled down Moulden trying to run clear from the middle of the park. Then one final fling led to Weston doubling their lead six minutes into stoppage time. Buse ventured upfield for a late, late Town corner which was cleared and as Grimes tried to retrieve, he slipped, allowing Lucas Vowles to run the length of the pitch and steer into the unguarded net. A comedic goal to conclude 90 minutes which started with cautious optimism but ultimately delivered nothing.

“There’s no excuses, we’ve got to be better with the players that are here now….” watch Rob Dray’s Match Reaction on Peacocks TV HERE 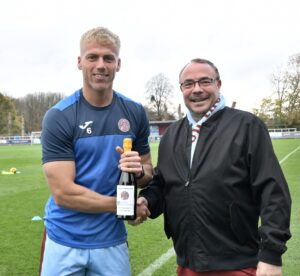