The Peacocks fought out their first goalless draw since September 2018 with a hard-earned point at the South West Interiors Stadium. The result was probably a fair reflection over the 90 minutes, with the home side edging the first half before Town had the better of the second period but despite the woodwork being hit three times during the game, other chances were limited with neither side being able to force that all-important goal.

The visitors welcomed back Joe Guest and Gethyn Hill after a one game ban while there was a league debut for new loan signing Joe Budd, but it was the home side who nearly took the lead in dramatic fashion inside the first minute when skipper Dave Sims-Burgess, in his last Bluebells’ appearance before signing for Bath City, crossed to James Harding whose first time strike was tipped over by Will Buse in the Peacocks’ goal.

Early Yate pressure eased, allowing Town to offer their opening gambit, Jay Foulston’s corner being cleared as far as Dan Sullivan who landed a shot over the top from outside the box. However the hosts were soon back on the offensive. Liam Angel’s cross fell to Joe Tumelty whose volley hit Jake Wannell and then a poor pass let in Sims-Burgess on the right and from his cross Harding glanced a header off the post. Sam Kamara’s shot then had the sting taken out of it by Sims-Burgess and rolled benignly to Buse as the Peacocks defended stoutly against a side who a week earlier had been playing in the 1st Round Proper of the FA Cup.

A potential turning point came and went just past the half hour. Sullivan nicked the ball off Angel and as he tried to run clear on goal was pulled down by the Yate centre half. Despite FA Law 12 stating that “denying a goal or an obvious goal-scoring opportunity to an opponent whose overall movement is towards the offender’s goal by an offence punishable by a free kick” is a sending-off offence, referee Duffell chose to disregard and show a yellow rather than a red card.

The visitors saw several openings appear during the latter stages of the half. Buse’s kick released Sullivan down the left and his centre found Toby Holmes unmarked in the middle, but the flag was up for offside, then Hill threaded a pass through to Sullivan who drilled an effort into the side netting. The post then prevented Town from heading to the dressing rooms with the lead, Sullivan whipping in a free kick from the left flank for Wannell to steer his header off the opposite post before the whistle sounded.

A decent move at the start of the second half gave hope of better things to come, Josh Thomas finding Sullivan who laid off to Holmes whose shot went the wrong side of the near post. However, the killer touch in front of goal continued to elude Town for the remainder of the contest, the nearest breakthrough being a set piece. After Tumelty had fired a free kick over the bar at one end, the Peacocks came significantly closer at the other. Holmes was pulled down by Will Tunnicliff, earning the Yate player a booking, and although the free kick from Foulston was curled expertly around the wall, the ball crashed off the crossbar.

Buse was again called into action, firstly punching clear Tumelty’s free kick and then parrying a shot from Ricardo Rees, Ben Adelsbury clearing the danger before a white shirt could capitalise on the loose ball. The remaining chances though tended to go the Peacocks’ way. Budd released Holmes who rounded keeper Andrew Hannah but his cross from a tight angle was cleared by Andy Lewis for a corner, then Holmes again sensed an opportunity as he cut in from the left but as he went to pull the trigger Tunnicliff made a timely interception. A quickly-taken free kick led to a Thomas cross being met by Sullivan but he was unable to find the target as he sliced a left-footed effort over.

Buse made a late save as he comfortably held a shot from Joe Hall, but it finished honours even as a point on the road lifted the Peacocks up a place to 7th in the table.

” I thought we were really good, I thought there was an element of control to our game in the second half as well…” watch Match Reaction from Rob Dray on Peacocks TV HERE 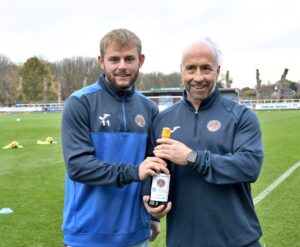