The Peacocks’ run of six unbeaten League matches came to a disappointing halt in North London. The incisiveness shown against Beaconsfield and the solidity displayed against Swindon Supermarine were both sadly absent overall after a poor first half had seen the hosts take advantage of some benevolent defending to lead at the break, and although Town improved for the second session they were unable to retrieve the situation.

The visitors fielded an unchanged team from the midweek win at Supermarine, but it was clear from the off that this would be a totally different kettle of fish with Town never looking 100% settled on a substandard 3G pitch. Hendon, who were without a win in four games, began the better, with Will Buse making a smart save low down from Wilson Carvalho’s shot. The Peacocks’ first effort came from Gethyn Hill who moved in from the left to fire wide from 25 yards before Nick Grimes’ crossfield pass reached Ross Staley whose strike from the left side of the box was parried and gathered by Dons’ keeper Fred Burbidge.

Toby Holmes set up Dan Sullivan for another shot which failed to hit the target and the same combination were out of luck again when Sullivan’s ball was cleared by Burbidge ahead of the incoming Holmes. The home side though appeared the more cohesive going forward and enjoyed a spell of pressure leading up to the opening goal. A corner was recycled by Shaun Lucien whose cross reached Liam Brooks at the far post, but Hill thankfully got in the way of the shot before Town hopes took a blow on 29 minutes when Ollie Chamberlain had to go off after falling awkwardly on his ankle and on came new boy Josh Thomas for his debut. Then, three minutes later, Hendon took the lead. A stray header from a throw on the right saw Brooks centre, Lucien’s shot was blocked by Grimes, but the loose ball was tucked into the corner by Carvalho.

Town claims that Burbidge had handled the ball outside his area were ignored by referee Cresswell before Sullivan’s shot deflected off Bristol Rovers loanee Joe Budd and was tipped over by the Don’s keeper, the closest the Peacocks came to scoring in the opening 45 minutes. Staley drilled another effort wide from the edge of the box before the half ended terribly for Town following a late Hendon burst. After Buse had held a long range Christian Smith free kick and Budd had failed to connect cleanly from Brooks cross, some shoddy defending cost the visitors dear on the stroke of half time. A long ball down the left found Brooks who wormed his way forward and took advantage of Grimes’ header into no-man’s land, the Town skipper slipping over and Buse hesitating for Brooks to slide his finish through the keeper’s legs for a 2-0 lead.

After a first half best forgotten, Town nearly shot themselves in the foot again when play resumed, Joe Guest being robbed by Hamza Sekula who made ground to curl a shot over the angle. However the second half did see the Peacocks gain more momentum going forward and they were unfortunate not to pull one back five minutes in when the ball broke to Sullivan outside the area and his half volley was tipped onto the crossbar by Burbidge. Jake Wannell failed to connect from the resultant Jay Foulston corner and Sullivan fired a shot wide as Town were managing to carve out some openings but with the killer touch missing.

A decent break down the right by Hill saw his cross reach Thomas and his attempted ball across goal cut out by Smith before Lucien had a strike blocked and then saw his shot safely collected by Buse as the hosts had a good spell. There was still hope though that Town might, just might, have something in the bag as they pressed looking to salvage something from the contest. Foulston’s deep free kick was headed wide by Ben Adelsbury, then Sullivan found space on the right but couldn’t hit the target. Another shot from Sullivan was blocked by the hard-working Smith who seemed to always be in the right place to frustrate the Peacocks, the Dons centre half then cutting out Sullivan’s intended through ball.

Holmes sent an angled shot wide of the far post after latching onto a pass from Zac Smith who then rifled wide himself as it became clear it was not going to happen. Stoppage time action saw Hendon sub Leone Gravata unable to connect with Jayden Clarke’s shot across goal while Burbidge punched clear Sullivan’s deflected free kick, but it was all academic to the final outcome on a bad day at the office for the Peacocks.

” It’s important that we learn, we realise that we’ve got to come away to places and we’ve got to grind out results…” watch Rob Dray’s Match Reaction on Peacocks TV HERE 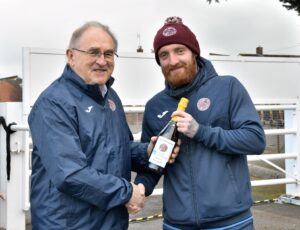