A single goal from Toby Holmes was sufficient for the Peacocks as they ground out another win at the Webbswood Stadium, their fourth in consecutive visits. It was not a night for the purists with driving rain and a gusty wind not making for a great spectacle but that won’t matter one jot to Town who were the better team over the 90 minutes and deserved their third League win on the road this season.

Two changes were made from the team that had dismantled Beaconsfield, Jay Foulston and Ross Staley coming in for the unavailable Ben Adelsbury while Khari Allen dropped to the bench. It was the home side though which posted the first attempt, a long goal kick falling to Ryan Campbell who found space to fire in a firm shot which Will Buse did well to turn wide. Although chances proved hard to come by in the opening quarter, Town began to assert themselves as they won a number of corners. Jake Wannell just failed to connect with Dan Sullivan’s flag kick while a Foulston free kick to the back post was headed back by Nick Grimes but claimed by Marine keeper Martin Horsell as Gethyn Hill waited to pounce.

The Peacocks kept up the pressure, Sullivan releasing Hill who was denied by a good block from Horsell, then Joe Guest’s lofted pass picked out the overlapping Ollie Chamberlain whose cross just evaded the jumping Hill. Foulston flashed a free kick just wide of the post after Zac Smith had been brought down on the right edge of the box before another set piece from the Town left back went deep, Hill’s knockdown fell to Holmes, but his strike was skewed wide of the target.

Supermarine managed a couple of attempts as half time approached but failed to trouble Buse. A cross from former Peacock Pierce Mitchell was spooned high over the bar by Zack Kotwica and Campbell fired a shot the wrong side of the post from 25 yards. A push on Kotwica then gave the hosts another opportunity but George Dowling drilled the free kick off the wall from a decent position. After his terrific strike in the previous game Staley tried for a repeat, however on this occasion his volley from distance was comfortably wide, leaving it even stevens at the break.

The second half began with the hosts thinking they had broken the deadlock, but Dave Pratt’s flicked header from Henry Spalding’s cross was ruled out for offside, the flag up before the ball hit the net. Pratt was again out of luck when he couldn’t direct a cross from Dowling on target and the ball trickled wide. The visitors responded, Staley firing another effort off-target and Hill’s header going narrowly over from Smith’s cross before the crucial goal arrived after 53 minutes. Town won possession from a Swindon throw, Hill managing to slide the ball across for Holmes to scuff untidily into the corner to the delight of the soaked travelling fans behind the goal. Not the most convincing of finishes but they all count J

From then on it was Town’s game to lose with Marine not posing too many problems and the Peacocks offering much more of a threat going forward. Foulston and Holmes saw further shots blocked while Hill moved outside onto Sullivan’s free kick but rifled into the side netting. Chamberlain fired a cross-shot over the top before Town made their only change of the night, Jack Veale coming on for Sullivan. And it was the young Exeter City loanee who nearly doubled the Peacocks’ lead with six minutes remaining, Staley finding him with a great pass which he brought inside before firing in a strike which deflected off Tyrone Duffus and looked to be in until Horsell made a spectacular save, clawing the ball onto the bar and away. Although Town won back possession, Smith planted his drive well over the top. A break in stoppage time saw Holmes cross to Hill who couldn’t get a shot away, but it mattered little as the hard work had been done to earn the points which propels the Peacocks up to fourth in the table.

” I saw things tonight from that group that have been missing at times this year….” watch Rob Dray’s Match Reaction on Peacocks TV HERE 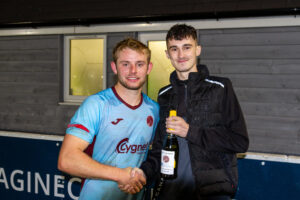