After the midweek mauling of Barnstaple, the Peacocks hit the goal trail for the second successive game with a seven goal thrashing of Beaconsfield. Two up at the break courtesy of Toby Holmes, the hosts soon added a third before the Rams scored to give themselves a glimmer of hope. However any such ideas were soon obliterated by Town who piled on the agony with four more goals to register their biggest League victory since December 2018.

It was a feelgood afternoon at the Cygnet Health Care Stadium, with bright sunshine warming the 500 plus crowd and partners from the club’s Community Engagement Project present to promote their valuable services. The home side welcomed Joe Guest back into a strong-looking starting eleven after a brief spell out through injury, so all looked well set. However the early exchanges were completely forgettable with neither side creating anything resembling a chance.

The first attempt at goal came from the visitors’ Toby Little who fired over the top, but the Rams came much closer to activating the scoreboard when a Little free kick from the left was hooked back into the mix by Nathan Minhas to fall for the unmarked Jordan Ajanlekoko whose strike was superbly turned wide by Peacocks’ keeper Will Buse.

Barely a minute later Town took the lead with a remarkable goal. Spotting Alex Tokarczyk well off his line, Holmes latched onto the ball just inside his own half and launched an effort over the head of the stranded keeper into the empty net with 18 minutes played. A fantastic goal to end an uncharacteristic lean spell from Town’s top scorer for last season.

The general play still remained scrappy at times though, the visitors having ample ball going forward but doing little with it, Will Buse’s safe catch from Little’s free kick being the only chance of note. The Peacocks meanwhile nearly added their second of the game on 36 minutes when Zac Smith played in Dan Sullivan who was unlucky to see his attempt graze the outside of the post and go wide. Sullivan’s shot was then touched wide by Tokarczyk, earning a Khari Allen corner from which Jake Wannell headed wide but there was still time for Town to grab a second before the break. With 45 on the clock, Grimes’ pass down the right found Ollie Chamberlain and his cross was swept home by Holmes at the far post.

The Peacocks wasted no time when play resumed in effectively confirming the three points. Jay Foulston, who had replaced Allen at half time, curled in a free kick to the right side of the box where Gethyn Hill rose to plant a peach of a header over Tokarczyk for his 12th goal of the season with just two minutes played. Beaconsfield showed they weren’t totally out of it when they pulled one back after 50 minutes, the ball breaking to Nathan Minhas who advanced to pick out the bottom corner of Buse’s net with a precise finish from 20 yards.

The home side disregarded this blip to go back on the offensive. Holmes just failed to direct his header on target from Hill’s knockdown and after Sullivan’s strike was deflected for a corner, Foulston’s delivery was recycled by Hill for Wannell to head over. Number four soon arrived though just before the hour, Foulston’s long ball finding Holmes and as he tried to wriggle clear he was nudged down by Baboucarr Jarra. Holmes confidently converted the penalty to claim his well-deserved hat trick. The three goal star then had a further header chalked out as the flag was already raised and Foulston belted a strike just too high from Chamberlain’s pass while Callum Webb drove over the angle in a Rams raid at the Travis Perkins End.

The visitors were given a slim lifeline after 74 minutes when Foulston was adjudged to have caught Webb as he moved in from the right. The chance was not taken though, Little’s tame penalty proving a relatively simple stop for Buse as he clutched down to his right. The Peacocks then put the pedal down in the final quarter hour to stretch their lead further. On 77 minutes Grimes diagonal cross was headed down by Hill for sub Ross Staley to drill home a terrific half volley from the edge of the box which Tokarczyk got a hand to, but the power was too much to keep out. Minhas was still doing his best at the other end to reduce the margin, turning to fire over the bar from 18 yards before his teammate Luke Neville stretched out his leg to divert Sullivan’s centre into his own net on 79 minutes for a 6-1 lead.

Despite the scoreline the Rams kept plugging away. Olly McCoy’s shot had the sting taken out of it by Foulston to roll harmlessly to Buse while much-travelled striker Jefferson Louis headed a chance wide from Webb’s cross. The final goal of the game with seven minutes remaining was a joy to watch. Chamberlain passed to Sullivan, his back heel set up Staley to cross and new signing Conor Hartley, who is already proving a crowd favourite, sidefooted his finish into the roof of the net. Hartley forced Tokarczyk into one final save as his header was palmed away before the proceedings came to an end. After the below par display at Kings Langley a week earlier, the Peacocks had bounced back to show what they were capable of and long may it continue!

” I still think there’s more to come from us over 90 minutes….” watch Rob Dray’s Match Reaction on Peacocks TV HERE 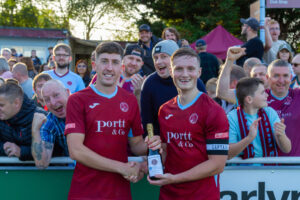