A strong Peacocks’ side was never seriously troubled by their Division One South visitors as they advanced in the Southern League Challenge Cup. After a couple of indifferent results it was a timely morale boost for Town against the North Devon outfit who have been struggling of late, having to recruit inexperienced players at this level, but to their great credit they never gave up. However there was never any likelihood of an upset with the hosts dominating throughout.

Head of Football Rob Dray fielded a powerful starting line-up which included new signing Conor Hartley from Ashton & Backwell United, Town’s conquerors in the Somerset Premier Cup the previous week, along with the welcome return of left back Jay Foulston. Given the experience in the side it was no surprise therefore that the Peacocks created a procession of chances during the 90 minutes, going ahead after just four minutes when Dan Sullivan played a square pass to Ross Staley who made space to lash a 20 yard shot over Dom Larter into the net.

Ben Adelsbury fired a free kick wide before the visitors produced their only real attempt of the half, JJ Evans running in from the right, only to see his shot deflect off Jake Wannell and fall comfortably for Will Buse to hold. After Foulston had switched feet to drive a right footer over the angle, Town increased their lead on 21 minutes. Barum conceded a loose corner which Sullivan swung in for Gethyn Hill to rise and glance past Larter. Sullivan weaved one way, then the other before firing wide as the Peacocks pressed for more but they didn’t have long to wait, Foulston’s diagonal cross from the left on 33 minutes being met by Hill’s diving header which he expertly steered past the exposed keeper for the third goal of the night and his 11th of the campaign.

The tricky Hartley who had a fine game on his debut came close with an angled strike before a dominant Town made it 4-0 four minutes before the interval, Zac Smith collecting a loose ball to pick out Sullivan who dinked his finish over Larter from the edge of the six yard box. There was still time for Lewington to head a decent opportunity wide from Foulston’s corner before the half time whistle arrived.

A double substitution at the break saw Khari Allen and Todd Watts introduced as the Peacocks went back on the attack. Hill picked out Sullivan, but his tame shot travelled wide, but a fifth goal wasn’t long in coming, Jack Goodall’s cross deflecting to find Lewington who reacted to hook a shot into the opposite top corner after 53 minutes. A rapid sixth nearly followed, Sullivan rifling a 25 yard shot off the crossbar before Staley curled an effort wide from Hartley’s cut back and Lewington’s header was smothered by Larter with an offside flag preventing Toby Holmes from capitalising on the loose ball.

Hartley made another jinking run, beating two men in the box but unable to get a clean shot away while a long pass found Holmes who was denied by Larter, the follow-up being fired wide by Hartley as the chances continued to come. Staley saw another shot go wide before the final goal of the evening was scored on 71 minutes, Sullivan’s corner being headed into his own net by Will Ellis on the near post.

Holmes surged past a defender but again saw Larter block from a narrow angle before Barnstaple nearly took advantage of some sloppy defending as the tie wound down, Neil Last intercepting to slide the ball inches wide of the far post. More slack play at the other end saw Larter gift the ball to Holmes who squared to Hartley, but the winger’s shot deflected over. All academic come the end as the Peacocks enjoyed a comfortable passage into the next round. 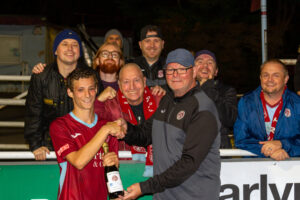