The Peacocks made it three Southern League games unbeaten after sharing the spoils in Hertfordshire, but they would undoubtedly have aspired for more at kick-off with the hosts lying at the bottom of the table. However Town never really got any kind of momentum going during the match despite missing a couple of good chances while Kings Langley also had moments of their own and ultimately deserved their point.

For one of their lengthiest trips of the season, the Peacocks side had a more familiar look to it, seven regulars back in the line-up after being rested for the previous game in the Somerset Premier Cup. Pre-match music included ‘Reasons To Be Cheerful Part Three’ by Ian Dury and the Blockheads but unfortunately this was not an omen for the 90 minutes that followed as Town chased their third successive League win.

A lovely warm autumnal afternoon saw little of note in the opening period apart from Harry Crawford’s shot veering wide of the target after 10 minutes. Taunton’s first opportunity came when Ollie Chamberlain was brought down on the right and Kings’ keeper Jack Berman parried the free kick from Lee Lucas onto the roof of the net. Alfie Williams dragged a shot wide from distance for the home side before another Lucas free kick was played square to Dan Sullivan and his shot was backheeled by Nick Grimes to Berman. This set the tone for the remainder of the half with neither side gaining any ascendancy.

Kyle Connolly linked with Arel Amu to get clear but saw his effort blocked by Jake Wannell and Connolly again found space on the left to cross to the unmarked Amu who could only direct his header over the bar. A break from the hosts then saw Amu feed Roddy Collins whose shot was blocked by Peacocks keeper Will Buse as Kings enjoyed a decent spell before Town responded.

Chamberlain sliced a volley straight to Berman and Zac Smith’s cross fell to Jared Lewington who fired wide before a Peacocks break should have yielded better on 36 minutes when Sullivan found Lewington inside who only succeeded in firing straight at Berman with the whole target on offer. The lack of effectiveness in front of goal continued when Collins fired narrowly past the post for the home side after a deep cross from Louis-Michael Yamfam and Alfie Williams also saw a strike travel wide while Gethyn Hill’s header struck the crossbar from a Lucas free kick moments before the interval although the flag was already raised for offside.

Some early pressure from the hosts produced the opening goal of the game five minutes into the second half. There didn’t appear too much danger when Kabir Kareem received the ball out wide on the right but a step inside Ross Staley gave him the opening to curl an excellent effort over Buse and into the far corner of the net. Collins had a shot held by Buse who then had to turn wide a curling strike from Williams as the game appeared to be slipping away from the visitors who were finding difficulty in creating anything cohesive. Lucas did flash an effort just wide of the upright before the Peacocks midfielder volleyed inches over the top after Ben Adelsbury had headed Staley’s corner back into the middle. Unfortunately, this proved Lucas’ last contribution as his wretched luck with injuries continued, the impact of the shot impacting on his knee.

A trio of successive corners then culminated in Town grabbing the equaliser after 77 minutes, the final one from Smith being met by Wannell whose well-placed header gave Berman no chance. The leveller at last gave the Peacocks an injection of energy as they started to up the ante on the Langley goal. The hosts were always in the picture though, sub Jack Wood moving in from the left to rifle just wide of the far post.

Had Town taken some late opportunities then the outcome could have been different. Toby Holmes broke away on the right to find Chamberlain whose goalbound drive was blocked by a defender, then Hill turned to fire wide from the edge of the box. The best chance though came when Staley’s clearance over the top released Hill whose powerful strike from 18 yards was parried by Berman. Bradley Wadkins sliced a shot wide in one last push by Kings before the contest ended all square. A point on the road is not to be sniffed at, yet the Peacocks will be fully aware their performance level will need to be raised much higher if they are to realise their ambitions this season.

“We weren’t at it today, for large periods of the game…” watch Rob Dray’s Match Reaction on Peacocks TV HERE

Match photos from Colin Andrews can be seen HERE 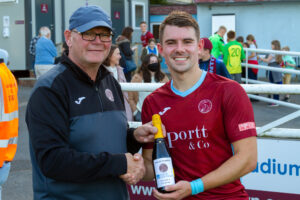