A miserable afternoon weatherwise was brightened up by the Peacocks grabbing a stoppage time winner at the Memorial Playing Fields. Gethyn Hill’s well-taken finish on the hour appeared to be guiding his side to victory until the home side equalised with a fortuitous goal two minutes from time before captain Nick Grimes headed in to confirm Town’s second away League win of the campaign.

With the Peacocks’ injury list reducing, Rob Dray was able to name a virtually unchanged team from that which had seen off Walton Casuals seven days earlier, the only alteration being Grimes returning for the absent Khari Allen. The trip up to Hampshire had seen the rain not ease off for a minute and so it continued during the 90 minutes with varying degrees of intensity. Given the volume of water descending, the pitch held up remarkably well, especially considering the fact that Aldershot’s match less than 10 miles away had to be abandoned due to waterlogging.

The first half produced no goals but plenty of effort from both sides as the game swung from end to end. Town were first to show, Hill’s effort being blocked although the offside flag was raised before Hartley tested Peacocks’ keeper Will Buse who comfortably held a shot from distance by Ben Wright and then did well to clutch a strike from the same player from the left side of the box.

Ollie Chamberlain’s run down the middle found Toby Holmes but his cut back across goal just missed Hill at the far post while a similar scenario happened when a Lee Lucas free kick reached Ben Adelsbury whose delivery back into the middle again failed to find a teammate. The home side then came close to breaking the deadlock with a 20 yard shot from Jordan Edwards which was creeping in at the post until Buse made a superb diving save to touch wide.

The Peacocks continued probing, Chamberlain setting up Dan Sullivan for a lofted shot which was held by home keeper Luke Williams and Chamberlain’s drilled cross just evading the boot of Holmes before Williams pulled off an excellent stop to keep out Chamberlain’s deflected strike from 30 odd yards. An even better opportunity came Town’s way when Hill headed down Sullivan’s looping cross which fell for Holmes six yards out, but he volleyed his attempt over the top. A couple of moments of loose defending fortunately did not cost Town just before the interval, Reece Robins latching onto a stray header but taking too long to get a shot in allowing the defence to recover, and then the same player intercepting a pass and being fouled, with Edwards’ subsequent free kick hitting the wall.

After shading the chances in the first half, the Peacocks looked to up the ante after the break. Sullivan blasted way off target before a good break saw him play in Zac Smith, but Williams came to his side’s rescue as he blocked the shot. After Sam Argent had glanced Ryan Case’s cross well wide, the Peacocks took the lead on 61 minutes. Jake Wannell’s clearance found Sullivan who made ground before releasing Hill and his perfect delicate chip over Williams from the edge of the area found the net, making it a remarkable eight successive games that the striker has scored.

Buse proved a safe pair of hands again when he held a strike from Robins before the contest was interrupted by a flare up following a challenge on Hill. After some lengthy consultations, nothing more than two yellow cards were produced for the hosts. At this stage Town were looking comfortable with their single goal advantage but some further sloppy play gave the Row an opening, a free kick conceded just outside the box which Edwards clipped narrowly wide of the post.

With two minutes left, Hartley drew level with a fortunate equaliser. Woking loanee Leo Hamblin tried his luck from way out and although his effort lacked venom, it took a wicked deflection off Adelsbury to wrongfoot Buse and nestle in the corner of the net. Had the scoreline stayed the same it would have been a case of two points dropped. However it didn’t….one minute into stoppage time Town won a free kick out on the right. Man of the Match Lucas, whose composure in midfield had been sorely missed recently, floated in the delivery and Grimes was there to nod over the line and seal a hard-earned success, just reward for the small band of travelling fans who had braved the elements to stand behind the goal during the second half. 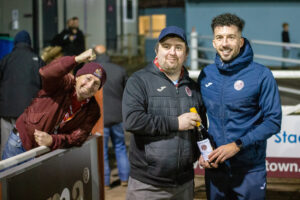