The Peacocks halted their recent run of disappointing results with a convincing win to climb up to sixth in the table. The visitors were one place above Town at the start of play but rarely made too many dents in an assured Peacock performance which saw them secure the three points with a trio of well-taken goals.

More positive news came in the shape of Jake Wannell and Lee Lucas being named in the starting line-up after spells out through injury while the only downside of the afternoon was the crowd of 331, the lowest for a League fixture at the Cygnet Health Care Stadium since April 2018. A rather frenetic and scrappy opening period of the game saw few openings for either side. A good run from Ollie Chamberlain led to Dan Sullivan drilling a vicious effort just wide for the hosts while at the Travis Perkins End Ben Adelsbury’s tackle on Zidan Akers saw the ball fly comfortably to Will Buse in the home goal before Reuben Duncan curled a free kick high over the bar.

A spell of Town pressure led to the opener after 27 minutes. Sullivan won the ball in midfield to find Gethyn Hill on the left corner of the box and Town’s top scorer this season moved inside before curling a shot beyond Jacob Adams into the net, maybe via a slight deflection off a Casuals defender. Chamberlain sent a snap shot wide of the target before Adams produced an excellent save three minutes before the break, getting down to keep out Jake Wannell’s flick as he connected with a Lucas corner. Adams then claimed Hill’s cross as Toby Holmes waited to pounce before the teams retired to their changing rooms.

An increasingly confident Peacocks added their second nine minutes into the second half. Hill ghosted past his man on the right to find Sullivan whose neat footwork gave him the opportunity to fire in a peach of a finish over Adams and into the top corner from just outside the area. A Lucas free kick into the middle then led to a scramble, the loose ball being dragged wide by Wannell.

The visitors had their share of attacks but failed to really trouble Buse. An Akers shot was deflected wide for a second corner which was played to Rohdell Gordon whose strike cleared the stand while Adam Liddle got on the end of Duncan’s cross, but it was a routine catch for Buse. Town were soon back pressing, Sullivan’s pass playing in Zac Smith who was denied by Adams before Wannell’s long ball reached Holmes who couldn’t get a shot away and although Sullivan could, it was blocked.

However the Peacocks rounded off their victory with a third goal after 81 minutes when a Lucas corner from the right was met sweetly by Adelsbury whose shot gave Adams no chance. The Walton keeper did well moments later though when Chamberlain broke away to release Sullivan whose strike from the edge of the box was palmed over. A late bout of pressure from Casuals came to nothing, Buse making another comfortable hold from Gordon’s shot and Duncan hammering an effort well over as Town gained a well-earned victory and their first clean sheet of the campaign.

“I thought we dominated totally the whole match in every way, in and out of possession we were superb….” watch Rob Dray’s Match Reaction on Peacocks TV HERE 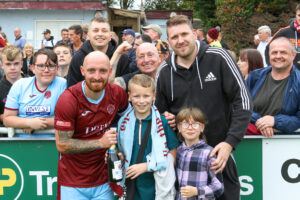 Dan Sullivan receives the Taunton Town Man Of The Match award from young Peacocks supporter Ryan Billington along with his sister Phoebe and dad Chris. Unfortunately Ryan was hit in the face during the game by a shot from Dan so presenting the award hopefully made Ryan feel a bit better J