The Peacocks contrived to surrender a two goal lead as they saw victory snatched away in the dying embers of the game at the BlackGold Stadium. All had looked good for the visitors in the first half hour with a healthy advantage no more than they deserved after some excellent football going forward but disappointingly, they failed to replicate the same vibrancy after the break and despite Poole being a man short, they grabbed a stoppage time equaliser to make it feel more like a defeat than a point gained at their promotion rivals.

With Town looking to bounce back after the loss at Farnborough, Bristol City loanee Khari Allen was drafted into the starting line-up and Jack Goodall dropped to the bench, the only alteration to the weekend. The Peacocks went at their hosts from the start, Will Spetch being cautioned in two minutes for felling Ollie Chamberlain before Allen and Chamberlain both saw strikes go over the top in a brisk opening. The opening goal duly arrived after just six minutes, Nick Grimes picking out Toby Holmes down the right and he advanced to the line to cross for Gethyn Hill to slot home his sixth goal of the season from close range.

It got even better on 10 minutes when the visitors doubled their lead. Dan Sullivan found Hill inside and he laid the ball into the path of Chamberlain on the left who drilled a shot across keeper Mark Childs and in off the far post. Zac Smith’s run into the box was then halted by Childs just in time with Holmes waiting to pounce as the Peacocks bossed the first quarter.

Smith unluckily saw his goalbound strike hit Sullivan who then beat his man on the right, only to see his intended cross to Hill cut out by Childs, as Town continued to pummel the Poole box. The first threat from the Dolphins did not arrive until 25 minutes in when Sam Jackson’s cross was met by Tony Lee’s header which Will Buse safely clutched. Spetch also headed over the bar while Buse held a low strike from Jack Dickson as the home side began to grow into the contest. They were forced to defend again though when Holmes strode in from the left but saw his effort kept out by Spetch.

A break from Poole led to them reducing the deficit after 35 minutes. A mistake at the back culminated in a shooting opportunity for Corby Moore which took a slight deflection on its way over but from the resultant Moore flag kick Lee ran in to direct his header into the top corner. The Peacocks had one more sniff before the interval, a Lee Lucas free kick being cleared over the bar for a corner, Allen collecting the clearance to weave into the box, only to fire well wide.

Ben Adelsbury replaced Lucas when the teams re-emerged for the second half, but it was the Dolphins who began the better. Jamie Whisken sliced wide from an early corner before Dan Bartlett nearly caught Buse out with an audacious effort from the halfway line, the ball going narrowly over to find the roof of the net. Town responded, with Holmes finding Hill in the middle but his attempted swing at a volley failed to connect, then Hill threaded a pass through to Sullivan whose shot was turned wide by Childs.

Poole went down to ten men after 57 minutes when Spetch was shown a second yellow for pulling back Holmes but any hopes that this would cement Town’s position were premature. Jez Bedford screwed a shot wide, and Lee ghosted in to head Moore’s corner over as the hosts continued to look dangerous from set pieces while chances were not taken at the other end which ultimately proved costly. Sullivan was proving a thorn in the side for the opposition and from his cross Holmes was unable to control and it came off him to reach Childs. A Sullivan free kick to the far post was then cleared by Lee for a corner which found Adelsbury, but his header was blocked on the line.

A Smith break gave Allen another opening which he drilled over the bar but with time running out it became ever more important for the Peacocks to manage the game effectively to ensure the win, even if a third goal was not forthcoming. Poole kept pressing, Bedford’s lofted shot being too high, then Lee sent a header over the diagonal and Ioan Richards made a great block to thwart the Poole goalscorer. Town meanwhile did not make best use of the ball when they had it, Sullivan firing wide from sub Dan McBeam’s pass and then a break from McBeam fizzling out with the hosts stretched. With the end in sight, Poole won two corners, Childs venturing upfield to help his side’s cause. The second corner proved fatal as it fell to Bedford on the edge of the box, his shot ricocheted to Lee, and he steered into the corner for the leveller four minutes into stoppage time.

“We’ve got to learn to be better in managing the last ten minutes of games….” watch Rob Dray’s Match Reaction on Peacocks TV HERE 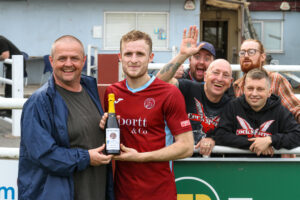