Town were unable to repeat last season’s win in Hampshire as they went down by the odd goal in five. It was a strong start for the Peacocks when in the third minute a corner from Lee Lucas dropped to Dan Sullivan whose effort went over the crossbar. It was the hosts who struck the first blow in the 8th minute when a cross from the left wing was met at the front post by Reggie Young who poked Farnborough into the lead.

Both teams had a fair share of possession with little to excite the crowd until Sullivan found Jack Goodall on the right flank, but his cross was no trouble for Baptiste. After that Farnborough created a flurry of chances. One more notable chance came from Nicholas Ciardini who pulled the trigger outside the box, with the slightest of touches off of Ioan Richards ensuring the score stayed at 1-0 as it whistled past the post.

A big chance came for Louie Paget in the 33rd minute when he was fed the ball, but his shot was comfortable for Will Buse. The Peacocks’ best opportunity followed when Toby Holmes was fouled on the edge of the 18-yard box. Lucas stood over the set-piece, but his strike went low past the post. Moments later Farnborough won themselves a penalty when Lucas bundled over Paul Hodges. The resulting penalty was converted by Paget into the bottom corner as he sent Buse the wrong way. This saw Farnborough go into the break with a two goal lead.

With a change of shape, the Peacocks came out for the second half looking to change their fortunes. An early chance from Farnborough’s Hodges was blocked before Ciardini followed with a high and wide effort. The Peacocks soon pulled one back when Ollie Chamberlain found Sullivan on the edge of the box, and he neatly lifted the ball over Baptiste to find the top corner. The Peacocks looked the more dangerous following the goal when Gethyn Hill came close with a header at the back post, but the hosts restored their two goal margin through Hodges who scored from the edge of the box.

The Peacocks hit back once again when a pinpoint pass from Zac Smith found Hill and he netted from a tight angle. Despite a long-range effort from Hill whistling past the post late on, the Peacocks were unable to find an equaliser as Farnborough took the three points.

“We didn’t quite do enough today, we didn’t have quite enough control…” watch Rob Dray’s Match Reaction on Peacocks TV HERE 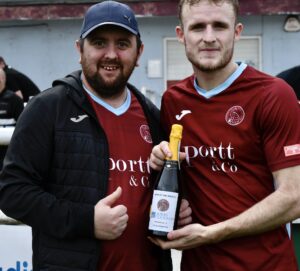