The Peacocks bounced back after two consecutive Southern League defeats to snatch a late victory over their Cornish visitors. It was a close run thing though, with Dan Sullivan firing in an 89th minute winner after ten man City had equalised after the break to cancel out Gethyn Hill’s first half opener.

With Jay Foulston added to the wounded list having sustained a hamstring injury at Hayes in the previous game, Head of Football Rob Dray rejigged his starting eleven, bringing Zac Smith back in plus Dan Sullivan for his first start of the season while Ben Adelsbury dropped to the bench. A Bank Holiday crowd of more than 600 observed a minutes’ silence prior to kick-off to remember former Taunton players and supporters who have sadly passed away in the past year and when play commenced the opening exchanges were all pretty low key.

The first incident of note came in the 7th minute, former Peacock Shane White getting his head on Will Dean’s free kick, but Lloyd Irish was there to make a clean catch. Then just three minutes later and Town were ahead. Ross Staley’s free kick from the right was headed upwards rather than clear and Gethyn Hill capitalised to hook a crisp volley from 15 yards past Truro keeper James Hamon into the far corner of the net.

Another ex-Town player Rocky Neal reminded Town fans of his danger when his curling cross was just too far in front of his teammates while Hamon was out to gather quickly at the other end as Sullivan threatened to latch onto Jake Wannell’s downfield pass as clear chances remained elusive.

Five minutes of drama then unfolded just past the twenty minute mark. An inswinging cross from a third former Peacock Ryan Brett rebounded off the far post, the closest the White Tigers had come to scoring thus far. Hill then went into the notebook for a challenge on Dean which sparked a brief flurry of unpleasantries before referee Sheppard gave Ed Palmer his marching orders for elbowing Staley with 25 minutes played.

Town looked to quickly take advantage as their opponents regrouped. Hill broke down the right to set up Ollie Chamberlain, but his shot was safely held by Hamon while Jack Goodall set up Sullivan to drive a swerving effort narrowly wide. The White Tigers also had their own opportunities though, White heading Brett’s free kick into the middle where Cheick Diabate placed a header wide. Neal then robbed Nick Grimes to make inroads towards goal, but Grimes recovered well to block any further danger. With the half time whistle imminent, the hosts came close to a second goal when Toby Holmes collected a clearance to round Hamon, only to see his effort kept out by Connor Riley-Lowe in front of the goal.

Playing towards the Town end for the second half, an early Jack Goodall cross drifted onto the roof of the net while Holmes got the better of White but couldn’t force the ball past Hamon and Hill had a shot blocked as the home side created several half chances. The best opportunity for a second though came just past the hour. Following good work from Sullivan, Holmes received Chamberlain’s through ball, again rounded Hamon but found Diabate in the way to block his effort from close range and prolong his lean spell in front of goal.

The visitors were then handed a chance to get back into the game after 66 minutes. Goodall brought down Harvey in the box and the City skipper got to his feet to drill the spot kick past Irish who dived the right way but couldn’t keep it out. Truro’s tails were now up following the equaliser and despite their one man disadvantage they began to look the more threatening team, winning several corners while Town conceded a number of free kicks. One such set piece nearly proved fatal for the Peacocks, a foul just outside the box giving Harvey the chance to curl in a fine effort which smacked off the underside of the bar for Sullivan to clear.

Jack Veale replaced Goodall with 15 minutes remaining with the points at this stage remaining up for grabs. Both sides had spells of attacking intent without engineering a clear opening and a draw seemed ever the likelier outcome. However the Peacocks were not finished. With one minute left Hill flicked a neat pass out to Chamberlain on the right and his driven cross bypassed a number of players to fall for Sullivan 12 yards out and he fired into the right-hand corner to send the home fans into raptures. The Peacocks comfortably saw out stoppage time to secure a much needed win and climb up to 7th in the table. 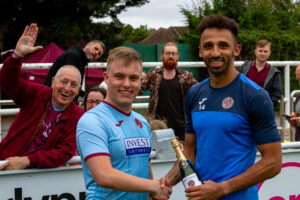