Town lost out to the early league leaders in West London despite fighting back to draw level in the first half after an early onslaught from the hosts. However a goal after the break was sufficient to secure the points for United to maintain their 100% record after four fixtures whilst Town will rue a missed late opportunity to salvage a draw.

There was some relief on the injury front before kick-off with the return of Ben Adelsbury and Dan Sullivan to the squad but Lee Lucas, Ioan Richards and Jared Lewington were all deemed not fit for selection and did not travel to the SkyEx Community Stadium. The home side demonstrated why they sat atop the table from the whistle as they tore into Town. Amos Nasha and Hassan Jalloh saw shots blocked and deflected respectively in the opening minutes before Jalloh, who proved a thorn in the Peacocks feathers all afternoon, found Moses Emmanuel inside and his strike forced Lloyd Irish into his first save of the match as he touched the effort wide.

However the early pressure paid off after five minutes. A strong run from Francis Amartey won a corner which arrived from the left, Irish went to claim but the ball slipped through his hands and Keano Robinson was on the far post to volley over the line to put Hayes ahead. The hosts were in control as the game reached the quarter hour mark at which point the Peacocks conjured up an equaliser against the run of play. Toby Holmes seized on a loose pass to release Ollie Chamberlain who surged into the box and when his drive was parried by United keeper Jack Smith, Gethyn Hill was on hand to sidefoot the rebound into the empty net.

The home side wasted a chance to regain the lead soon after, Emmanuel setting up Amartey for a shot which he drilled over the top, as Hayes continued to attack with strength and pace. The leveller though was what Town needed to gain a foothold in the game, with Chamberlain prominent in a positive Town response. He received a pass from Joe Guest to fire a 30 yard effort off the crossbar just past the half hour before he won the ball to feed Ross Staley who rifled an angled strike narrowly over. Jack Goodall’s ball down the right then reached Hill whose shot from the right side of the box was blocked by Smith for a corner which was headed over by Adelsbury.

As the interval approached Hayes enjoyed another intense phase of pressure on the Town defence who had Irish to thank for the keeping the teams level. Omar Rowe’s inswinging cross from the right was pushed wide by Irish after Emmanuel had just failed to connect and when the ball was returned into the middle the Peacocks keeper dived to keep out Ben Frempah’s header and smother Jalloh’s attempted follow-up. The crisis eased when Emmanuel drilled a shot way over from the ensuing corner before the half came to an end.

The second period was only four minutes old when the visitors suffered yet another injury blow, Jay Foulston limping off to be replaced by Sullivan for his first appearance of the season. There was then a brief melee between players, cause of incident unknown, which saw Rowe and Jalloh along with Town’s Hill enter the referee’s notebook.

The contest soon settled back into type, with the hosts on the front foot. Amartey cut in from the left to try his luck but Irish held comfortably and then Jalloh found space, only to drag his shot wide of the target. A superb blocking tackle by Adelsbury prevented Jalloh from doing more damage before Irish was again called into action, blocking a shot from Emmanuel following a clever ball from Nasha. Moments later the decisive goal of the game arrived with 15 minutes left on the clock. Jalloh swung in a free kick from the left and Emmanuel dived in to glance a header beyond Irish and into the net off the post.

Jack Veale replaced Goodall with ten minutes remaining and very nearly gained Town a point. Sullivan got clear down the right and his centre got a diversion off the defender to fall nicely for the incoming Veale whose strike was the right height for Smith to palm away for the ball to be cleared but Town regained possession, however Chamberlain’s shot was wide.

As the game entered stoppage time, Town kept pressing to try and salvage a point but failed to create a clear opportunity. Smith required treatment following a corner to further drag the game out and the last hope came and went when Staley’s free kick into the box came off Veale and travelled harmlessly to the keeper, leaving Town to regroup for another important game in 48 hours time.

“We should have equalised in the last five minutes, I thought we did enough to get a draw out of the game…” – watch Rob Dray’s Match Reaction on Peacocks TV HERE 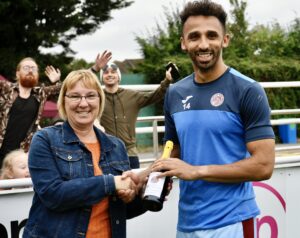