Proof that football can be a frustrating game was never more borne out as the Police side made it three wins from four visits to the Cygnet Health Care Stadium. The Peacocks could not translate their first half domination into goals before conceding the only goal of the contest shortly after the break, after which the visitors comfortably defended their lead.

Town were again missing faces, their wounded list now standing at five after Ioan Richards suffered a leg injury against Dorchester. However any absence was brushed off as the home side controlled the opening 45 minutes. The first chance came inside the first few minutes, Ollie Chamberlain getting his head on Jake Wannell’s cross, but Police keeper Liam Beach was down quickly to push away. Jay Foulston and Chamberlain had further shots blocked before Jack Goodall made ground down the right and drove a cross to the near post which Beach touched wide at the last minute. From the corner Wannell headed over at pace and then Gethyn Hill’s back header went the wrong side of the post as the Peacocks maintained their bright start.

Chamberlain, who was only declared fit to play before the game after a test, was having another excellent game and a fine run and cross into the middle saw another chance but Toby Holmes’ close range header was tipped over by Beach. Ross Staley, making his first start of the campaign, cut in to drive an effort over the bar while Chamberlain and Zac Smith had sights of goal, but their shots were regulation holds for Beach as some great build-up play from Town was just failing to find the killer ball or touch.

Virtually nothing had been offered by the Met side for the first 40 minutes but the final stages of the half saw them provide their first effort, Ollie Knight’s shot from just outside the box deflecting onto the roof of the net before they missed a golden opportunity to gain the advantage at the break, Jack Mazzone putting Liam Ferdinand through but after rounding Lloyd Irish he lost his footing and the chance had gone.

The Peacocks began the second half well enough, Smith’s inswinging cross being palmed over the bar by Beach and Irish’s goal kick being flicked on by Hill to Holmes who was just unable to connect. However it was the Police who scored what proved to be the winner on 52 minutes, a chipped ball over the top finding Mazzone who let it bounce before lobbing over Irish from 12 yards. From being totally second best, the goal sparked the Police into action. Luke Robertson saw a strike deflect over and Mazzone had his header blocked by Irish at the far post.

Holmes muscled through on the left but again found Beach in the way as the Met shotstopper saved with his legs and he repeated the act soon after when Holmes received Chamberlain’s pass to try and sneak a shot in at the near post from a narrow angle, only for Beach to block the route. Generally though Town were increasingly struggling to create anything of note as the visitors dealt competently with the home attacks. They also threatened to add to their lead, Knight and Ferdinand both planting unmarked headers wide while Jack Knight had a shot blocked. To make matters worse, Smith had to be substituted with an ankle injury as the game entered stoppage time but by then the momentum of the first half had long disappeared as the Peacocks suffered their first defeat of the season.

“We need to be ruthless, we need to be not quite so naive, that’s where top teams are….” watch Rob Dray’s match reaction on Peacocks TV HERE 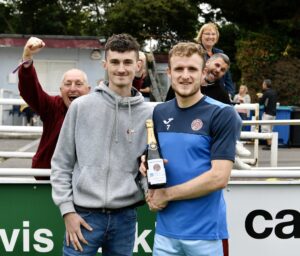