A late penalty miss from the visitors saw the Peacocks scrape home following a chalk and cheese performance. An entertaining first half saw the Magpies grab an early lead before Town hit back immediately with two goals in a minute from Ollie Chamberlain. Several other chances went begging before the break which the Peacocks nearly came to regret in stoppage time but thankfully Tom Purrington’s spot kick failed to find the target.

Already missing the injured Dan Sullivan and Ben Adelsbury, the home side also had Jared Lewington and Lee Lucas absent after both picked up knocks in the opening day win at Wimborne, resulting in two Bridgwater and Taunton College students being drafted onto the bench. The hosts made a brisk start, having all the early possession, although the first clear opportunity came Dorchester’s way, a Peacocks attack breaking down, allowing Purrington to put Sam Bayston clear but Lloyd Irish made a blocking save. The opening goal though wasn’t far away. Tiago Sa’s cross from the left not being properly cleared and Bayston swept home into the far corner of the net from the middle of the box to give the Mapgpies an 11th minute lead.

The Peacocks were not trailing for long. Straight after Gethyn Hill’s goalbound effort had been blocked by Callum Buckley, Zac Smith and Jay Foulston linked up on the left for the latter to cross, Dorchester keeper Gerard Benfield failed to claim the ball and Chamberlain was on hand to nod over the line for the equaliser on 14 minutes. A minute later and Town were ahead, Jake Wannell’s long ball finding Toby Holmes who beat his man to advance into the area from the left and set up Chamberlain to strike a fine finish into the corner of the net from 16 yards.

Play then swung to the other end, a timely challenge by Ioan Richards denying Harry Burns as he threatened to shoot and Oakley Hanger seeing his shot blocked by Irish as Dorchester demonstrated some tidy football going forward. The Peacocks though had enough opportunities before the interval to make the points a formality. An unmarked Hill headed Foulston’s cross over the top, a Foulston free kick from just outside the box was drilled way over and Smith intercepted a loose Buckley pass to set up Holmes but his former Wimborne teammate Benfield thwarted him with an outstretched leg.

Town continued to pressurize until the whistle, Hill neatly turning onto Foulston’s cross but couldn’t keep his shot down and a last ditch clearance denying Hill again as he looked to pounce on a Holmes centre. And that realistically constituted the Peacocks’ final opportunity of the match. The half time break seemed to drain all the attacking intent from the hosts as they sat back for the vast duration of the second half and soaked up any threat from the visitors. After a scrappy start to the half, the Magpies began to gain the upper hand in terms of possession but did no real damage as the Town defence stood firm. A small bout of pressure ended with Billy Lowes setting up Purrington for a shot which he sent over the bar while Lloyd Irish held a cross-shot from Burns and a routine catch from Hanger’s free kick dealt with another potential opportunity. The Peacocks introduced all three substitutes during the half as they tried to spark an attacking response, however it wasn’t happening as Dorchester looked the likeliest to score.

It seemed the hosts had done enough to see the game out, that is until the fourth minute of stoppage time when Sam Davidson nudged a pass through the defence, and Richards caught Bayston as he ran on. Referee Scriven had no hesitation in pointing to the spot and it appeared the win was going to be denied at the death. However Purrington, who spent some time on loan with Taunton two seasons ago from Plymouth Argyle, ballooned the penalty over the bar, the home fans celebrated, the Magpies rued the loss of a deserved point after their second half showing and the Peacocks team could breathe again as they made it two wins from two.

“As a group they’re aware how much better they’ve got to be..” hear Rob Dray’s match reaction on Peacocks TV HERE 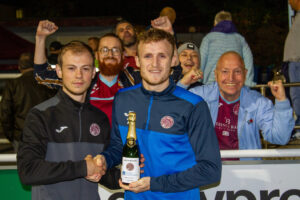