Two goals from Jared Lewington helped secure the Peacocks a handsome opening day win as they acted as party poopers for Wimborne’s first competitive match at their New Cuthbury home. After falling behind to a sloppy goal midway through the first half, the visitors were ahead at the break courtesy of Lewington’s equaliser and a Toby Holmes penalty before they went on to add two further goals in the second period to complete the job.

Pre-match discussion on the likely starting eleven travelling down to Dorset proved correct with the Peacocks fielding the anticipated side which included Lewington and Ioan Richards who were both making their competitive debuts. The sloping pitch and characterful stands of the Magpies’ former ground had been replaced by a flat playing surface and more modern spectator accommodation as the teams entered the arena in warm sunshine in front of a crowd just shy of 600. And the away side made a tidy start, Zac Smith firing over after Lewington’s shot had been blocked and Jay Foulston’s cross being just too far in front of Holmes.

The hosts first break saw Lewis Beale set up Ben Scorey for a shot which whistled just wide before they grabbed the lead out of the blue after 22 minutes. A goal kick downfield from Wimborne keeper Billy Terrell saw Lloyd Irish rush out to meet but he only succeeded in colliding with Aidan Shepherd, the ball falling loose for Beale to fire into the unguarded net. The setback did not put Town off their stride as they kept probing for their own breakthrough. Jake Wannell and Smith linked well down the left with the former’s driven cross being held by Terrell who also made a routine collection from a tame Holmes shot from the edge of the box.

The luck changed on 39 minutes when the Peacocks restored parity, Ollie Chamberlain winning a corner which Foulston delivered for Lewington to head in at the far post. The joy of the equaliser was slightly dulled when Lee Lucas had to be subbed three minutes before half time after taking a knock which saw young Exeter City loanee Jack Veale make his competitive bow. After Charlie Gunson had seen his shot deflect for a corner, play swung to the other end. Foulston’s pass over the top was picked up by Holmes who tangled with Callum Chugg. The Magpies defender was adjudged to have pulled Holmes to the ground as he tried to run past him, and the Peacocks frontman got to his feet to send Terrell the wrong way from the penalty spot seven minutes into first half stoppage time.

The Peacocks gained full control of the game after the interval. Early chances came when Holmes cantered in from the left but had his effort blocked by Terrell, then Holmes again got goalside of the defender from Veale’s long ball, however he was unable to get enough lift on his lob and Terrell was able to save. A strong run from Chamberlain ended with his shot being blocked, Foulston’s free kick was just too high, and Richards headed a corner over as Town continued to create opportunities.

The pressure eventually paid off after 68 minutes with a deserved third. A neat break saw Veale find Joe Guest on the right and his centre was met by the incoming Lewington who drilled his finish past Terrell from 18 yards. Unfortunately the two goal striker appeared to pull his hamstring in the process of scoring and had to be substituted by Gethyn Hill. The outcome of the contest was then sealed after 72 minutes, Nick Grimes finding Veale inside and with space opening up for him his shot caried too much pace for Terrell who got a hand to it but could not keep it out.

Soon after, Hill came close on two occasions to increasing Magpie misery, firstly when he robbed Jamie Henry and clipped his effort inches wide of the far post, then powering a header over from Veale’s corner. Another chance came and went when Grimes failed to connect from Foulston’s corner while Holmes had a strike blocked as the visitors persistently threatened. A rare home break led to Beale setting up Connal Morrison for a shot which was blazed over but by this stage Wimborne were playing for pride.

Holmes got through again on the left but was denied by Terrell, the follow-up shot from Foulston being held by the busy home keeper, while Chamberlain, who had an excellent game down the right, saw two further efforts just miss the target as the Peacocks pressed for more but had to settle for four when in reality it could have been far more distressing for the hosts.

“On the whole I’m very pleased with the boys, there’s more to come from us…” watch Rob Dray’s match reaction on Peacocks TV  HERE 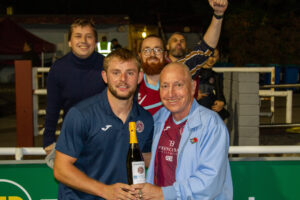