Chances were limited in a match played on a bumpy surface in swirling wind which ensured that neither side was able to display quality. Taunton shaded the first half, scoring with the first real chance of the game.

The Peacocks pressing high forced a corner and Shane White rose highest in the 12th minute thumping a header home from the middle of the penalty area from Ryan Brett’s in-swinger. Truro started to get into the game although struggled to cause the Taunton defence major problems or trouble Lloyd Irish too much.

Irish gathered a couple of half-chances; Dickson was booked for diving in the Taunton penalty area and an Alex Battle shot went wide of the Peacocks post. Man of the Match Ryan Brett and Nick Grimes picked up bookings.

The first half ended however, with the Peacocks very much on the offensive, building patiently and winning a series of throws down the left and swinging in a few dangerous corners which were cleared or caught by the Truro keeper. Taunton Town were good value for their lead at the break.

The second half began with a change in the visitors’ midfield, Ryley Towler replacing Harry Kite, and the Peacocks continued going forward early in the half. Dan Sullivan forced the Truro keeper into a good low save and a Ben Adelsbury shot rolled into the arms of the stopper.

The hosts began to attack with a little more purpose, winning a couple of free kicks. The second of these on the right, just outside the Peacock’s 18 yard box, was driven in low and was met by Truro striker Tyler Harvey who tapped in from close range on the edge of the six yard box to equalise on 64 minutes.

With the scores level, the Taunton Town defence stood firm to the handful of half-chances the hosts created, and a tight midfield battle ensued in the difficult, windy conditions. The Peacocks’ defence stood firm and created the better of the limited chances during the latter period of the half. Jamie Short screwed a shot wide following good work by Dan Sullivan and Jamie Price struck the crossbar with a fierce left foot drive from the edge of the penalty area.

The final whistle came with honours being shared and the visitors returning home with their vociferous supporters with a well-earned point, keeping the Peacocks in 6th place just outside the Play-Off places. 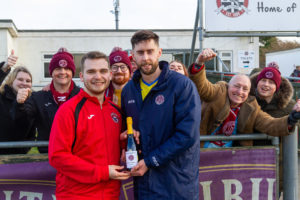 Ryan Brett being presented with his award