The Peacocks came away from a difficult fixture with a well- deserved draw against one of the form teams, whose manager Paul Hughes was in charge for the 200th time.

Omar Rowe had already fired over for the home team when they opened the scoring after ten minutes. The wind contributed to a failure to clear the ball which allowed James Clark to set up Manny Duku for an opportunity which he did not miss at the second attempt.

Hayes dominated the opening quarter, with Duku heading another chance over, before the visitors began to show some form and it was no surprise when they equalised after 23 minutes. Jamie Short broke forward after linking with Matt Wright and from his cross Dan Demkiv headed in to celebrate his first start for the club with his first goal. Ollie Chamberlain had a chance to put the visitors ahead soon after, but his shot was comfortably saved by home keeper Dan Lincoln.

It looked as though the teams were going to go in level at half time but again an inability to clear the ball proved costly in a minute into first half injury time, the ball falling to Rowe who restored the home side’s lead with a lovely left-footed finish from just outside the box.

The second half began in similar vein to the first with Hayes on top. Lloyd Irish foiled Hassan Jalloh but the hosts were unable to add to their goals tally and again the visitors got stronger as the half went on. The second equalizer came after 68 minutes when skipper Wright received a throw to hook the ball across where it was headed in by the hard working Dan Sullivan at the near post.

Town pressed looking for the winner, with Wright having a goal disallowed for offside and Luke Spokes heading over from Sullivan’s cross, but it finished all square. The draw meant that Taunton did not overtake their hosts in the table, but they remain well on course for a second consecutive play-off berth. 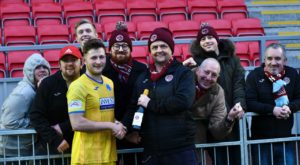