The Peacocks swapped places with their hosts in the Premier South table following a crucial victory at a blustery Webbswood Stadium. Supermarine held the advantage at the break before Town scored twice in the second half to earn the points with a thoroughly professional performance.

There were two changes to the side from the last league outing against Harrow Borough, with Ross Staley replacing Lewis Hall who had been delayed returning from abroad, and Harry Kite coming in for Luke Spokes. It was a bright start from the visitors who looked positive going forward. Matt Wright’s driven cross was pouched by Supermarine keeper Martin Horsell and then the Town skipper powered a header past the post from Ollie Chamberlain’s diagonal ball into the box.

Supermarine had their first attempt when Ryan Campbell headed well wide after Town couldn’t get the ball clear and then Henry Spalding found the dangerous Conor McDonagh on the outside, but his shot was blocked for a corner. After Wright had glanced a Ryan Brett corner wide, the Peacocks were unlucky not to take the lead on the quarter hour when Dan Sullivan’s first time strike rebounded off the top of the far post after Brett’s pass inside had teed him up.

Neither side though could find the finishing touch, with Marine captain Stuart Fleetwood dragging a shot wide while at the other end Nick Grimes advanced forward to try his luck but his effort rolled harmlessly wide of the target. That all changed after 34 minutes when the hosts took the lead. Michael Hopkins fed Campbell down the left and his pass through the defence put McDonagh clear to round Lloyd Irish and slot into the net past the covering players on the line.

The hosts protected their lead without too much worry until the break before coming close to adding to their tally six minutes into the second half when Brad Hooper’s 20 yard shot crashed off the bar, and although McDonagh netted the rebound it was chalked out for offside. Ross Staley scuffed a shot wide for the Peacocks who drew level after 57 minutes. Wright headed Chamberlain’s deep cross back into the middle, Jamie Price just failed to connect and when Sullivan went down after a Louis Spalding challenge referee Holden awarded a penalty, with Brett making no mistake from the spot.

Marine responded with three corners before Town came close again when Brett drilled a shot narrowly wide, and Chamberlain was just unable to direct his far post header on target from Staley’s cross. A second goal for the Peacocks arrived on 69 minutes, Chamberlain winning the ball on the left and finding Sullivan on the edge of the box and his strike took a deflection off Matt Williams to find the net past Horsell.

Town continued to ask questions of the Marine defence, Wright having a shot blocked and Jamie Short volleying wide while Grimes headed Brett’s free kick over. The Peacocks backline meanwhile coped with anything the hosts could offer, their best effort in the latter stages coming when McDonagh weaved inside the box but sent his shot over the top. Dan Demkiv came off the bench in stoppage time to make his Peacocks debut but had little time to make an impact as his new side recorded an impressive win. 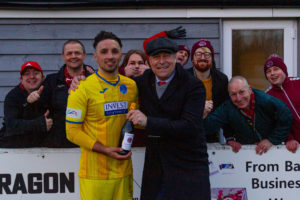