A manic spell of four goals in seven minutes during the second half highlighted an otherwise unremarkable game as the Peacocks ground out another win in their pursuit of promotion. It is fair to say Town made harder work of the task than they might have, conceding some sloppy goals and struggling to get into a rhythm against tricky opponents who were never out of the picture.

Still missing top scorer Andrew Neal with a knee complaint, the Peacocks had Luke Spokes make his home debut while Jamie Price came back in defence for Ben Adelsbury who had a hamstring niggle and dropped to the bench. The first few minutes gusted away in the strong wind with nothing of note until Town broke the deadlock after six minutes with the first chance of the game. Spokes fed Shane White out wide and his cross was met on the half volley by Dan Sullivan who directed his effort inside the post from twelve yards past a static Luca Ashby-Hammond.

One nearly became two on Town’s next attack, Ollie Chamberlain surging in from the left to set up Spokes whose drive flashed just the wrong side of the upright at the Invest Southwest End. A couple of Ryan Brett corners also failed to trouble the visitors who were not making much of an impression themselves at the opposite end. Okem Chime scuffed a shot wide after latching onto a deflected clearance and then failed to get anything into another effort from George Moore’s cross, the ball rolling quietly to Lloyd Irish.

Another three corners for Harrow proved fruitless, although the last of the trio did raise the alarm as Town had to scramble to get the ball away as the visitors tried to get in a clear shot. With half time approaching the Peacocks nearly added a second when Chamberlain’s pass evaded Shaun Preddie to reach Sullivan who fired against the outside of the post from a narrow angle on the right side of the box. That opening proved rare in a first half which had little to excite the 602 crowd but crucially Town had the advantage going into the second half.

Town’s lead was so close to being compromised when play resumed, Chinua Cole’s cross from the left reaching Moore whose snapshot was kept out by Irish who got down excellently to palm the ball away. Generally though neither keeper was being overly active as both sides struggled to hit the target. White’s header drifted wide from Brett’s corner for Town while Harrow skipper Marc Charles-Smith nodded over from Cole’s cross and Tom Scott blasted another attempt way over the top before Brett had a shot blocked at the Innovation By Design End.

The crazy goal glut began after 64 minutes. A needless free kick was conceded on the left after the Town defence failed to shepherd the ball out of play and from Michael Bryan’s delivery Irish had no chance with George Fenton’s close range header. Town were back in front just three minutes later. Sullivan made ground to find Brett who in turn passed wide to Matt Wright, Ashby-Hammond made a great save to fingertip the Town captain’s strike onto the bar but Harrow couldn’t clear their lines and Jamie Short rifled a fine finish into the far corner of the net from the edge of the box.

The Peacocks needed to stabilize but then shot themselves in the foot barely two minutes later. Ross Staley, making his first appearance in front of home fans since returning from Australia having replaced Lewis Hall five minutes earlier, must have felt like hiding Down Under when his loose header fell nicely for Okem Chime to guide past Irish from 18 yards and bring the teams level again. Harrow’s joy was brief though as Town regained the lead after another two minutes. Harry Kite burst through the middle and slipped a pass to Brett on the left and he neatly slotted home across the keeper into the opposite corner.

Staley’s wicked cross was just too high for Chamberlain to connect with at the far post as Town looked to ward off any further equalisers. However the latter stages saw Borough apply some late pressure but created little, Moore coming the closest with a shot which went narrowly wide. With the last kick of seven minutes stoppage time Harrow had the ball in the net. The goal was ruled out though after Anthony O’Connor had evidently used his hand to direct Dylan Ive’s free kick into the net. Far from a vintage performance from the Peacocks but first and foremost a positive result to set them up for a challenging month ahead. 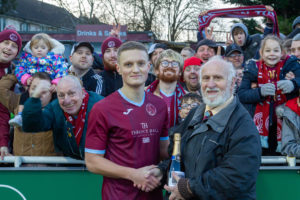