The absence of top scorer Andrew Neal (injured) and Ollie Chamberlain (ill) meant that this was always going to be a tough game.

The opening goal came after 13 minutes it was the home side who scored it from a long throw by Adam Martin which was headed on by Mark Kirby and skipper Steve Brown fired it home from close range. Taunton equalized after 25 minutes from a Ryan Brett corner which was not properly cleared and it was a thumping shot from skipper Matt Wright which drew the scores level. The rest of the half was not too eventful although Brown could have added a second heading over from a Dave Pearce corner.

The home side made a good start to the second half and a Billy Adcock header went wide. Another Pearce corner after 68 minutes led to a handball which resulted in a red card for Taunton defender Shane White but although Pearce’s penalty sent Taunton keeper Lloyd Irish the wrong way it hit the post and rebounded to safety and a golden opportunity had gone begging. Against ten men the visitors went on the defensive and Chesham never really looked like retaking the lead so the Peacocks came away with a creditable draw. 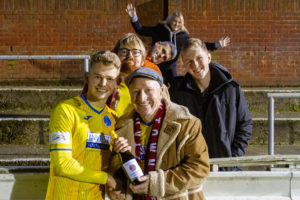