Whereas the Peacocks’ most recent away League game had resulted in a wholly undeserved defeat, there was no injustice about the outcome of this match following an insipid performance at Lodge Road. Yate, who started the day in 20th spot, were two goals to the good inside the opening 20 minutes and although Ryan Brett pulled one back direct from a corner to only trail by a single score at the break, a listless Town conceded twice more in the second half to cap off a miserable afternoon.

The players rested for the League Cup tie in midweek all reappeared, with Harry Kite filling the No 10 shirt in the absence of the suspended Dan Sullivan and Bristol City loanee Ryley Towler swapping to centre half due to Nick Grimes having only just had surgery to reset his broken nose. The previous weekend’s fightback victory against Gosport had halted a run of two losses and with hopes that a winning sequence could be maintained, a large travelling support had travelled up the M5. How they were to be disappointed.

The visitors nearly broke through in the first minute, Towler’s free kick being headed on by Matt Wright to find Andrew Neal whose shot was blocked by Yate keeper Adam Forster. Wright then blocked Jake Lee’s effort at the other end following a corner, but it wasn’t long before the Bluebells were ahead. Kite won the ball in midfield but Aysa Corrick battled to win it back to make ground and slip a pass through to Nick Peare who guided the ball home past Lloyd Irish with the outside of his left foot after 10 minutes.

A blocked Joe Guest shot was then worked to Sam Kamara who fired wide from just outside the box before the first yellow card of the day arrived after Joe Low had fouled Neal. Brett’s free kick though sailed wide of the near post. Town’s defensive frailties were further exposed after 18 minutes when Yate added their second. Peare’s cross from the left bypassed the defence to reach Corrick who played inside to Sam Bell and he found the far corner of the net at the second attempt after his first shot had been blocked.

The Peacocks were back in it four minutes later though when they reduced the deficit. Kite won a corner on the right and when Brett swung it in, the ball curled over the line with the wind at the near post, with Jamie Price making sure. Wright then prodded the wrong side of the post from Shane White’s cross although the referee had already blown for an infringement. Elliott Keightley cleared Neal’s cross for another corner, but overall Town were not clicking going forward unlike the opposition who linked up effectively as they made inroads.

Yate were close to a third goal on 34 minutes when a soft free kick was awarded against Towler and Luke Spokes’ curling 25 yard free kick smacked off the crossbar. Neat interplay between Kite and Neal earnt Town another corner at the opposite end before Irish kept his side in the game up to the break, parrying a shot from Corrick who had broken away down the right and when Town were again slow to clear the loose ball, Bell was on to it to fire goalwards, only for Irish to make a fantastic save by tipping the close range shot over. Town were close to regaining parity when White’s header from Brett’s corner was blocked on the line before they were grateful to see Spokes bend a shot wide.

Town were slow out the blocks when the second half commenced, Kamara bursting into the box to see his effort blocked. However with just seven minutes played the Peacocks were left with a big ask when Yate scored a freak third. Low won the ball around the centre circle with a hefty volley upfield which caught Irish off his line and dipped under the bar. Peare planted another shot wide while frustratingly Town had no creative response as they laboured through the rest of the game. Their first effort of the half came 16 minutes in when Brett won the ball on the edge of the area, but his strike was well wide. Yate were having less trouble finding the target, with Irish again saving well from Bell’s strike after Spokes had laid across from the right.

Forster was then forced into his only exertion of the half when he gloved over Neal’s cross-shot for a corner which he also punched clear and when Kite headed back into Neal, the striker’s angled shot was blocked by the keeper’s legs. Irish meanwhile remained much the busier, smothering a shot from Tommy Conway after he had turned in the box.

Apart from Neal’s efforts, the only time Town came remotely close to scoring after the break was when Wright got on the end of Brett’s corner but his glancing header at the near post was nodded off the line by Kamara. Yate though piled on the agony further for the Peacocks fans. After Peare had also found the bar with a free kick, Bell scored his second of the game two minutes into stoppage time, a pass through the middle putting him in the clear and he made light of the two defenders around him to slot into the corner, sealing a deserved league double for the Gloucestershire side and leaving the Peacocks with a lot of hard thinking to do before Wimborne visit the Cygnet Health Care Stadium next Saturday. 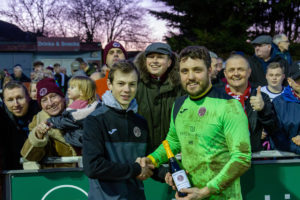