The reality that football can be a cruel game was rammed home to the Peacocks after they lost a game in which a point was the least they should have expected after a dominant second half performance. After hitting the hosts with a two goal salvo inside the first six minutes, Town were pegged back by a resurgent Tiverton who had drawn level by the break. Although the Peacocks then bossed the entire second half, they were unable to break through and were caught out by a sucker punch stoppage time goal for the home side which held on to clinch an important albeit undeserved victory.

The Town side saw a couple of changes to the one that had lost last time out against Weston-super-Mare, with Owen Windsor and Harry Kite coming in for Zac Smith and Shane White who was not fit to start. A murky New Year’s Day in Devon was illuminated by a scorching start to the game from the visitors who were ahead after just three minutes. Matt Wright was pulled down on the left for a free kick which Ryan Brett swung into the box, Nick Grimes headed into the mix and Wright’s header was punched clear by keeper Lewis Williams but only as far as Ben Adelsbury who fired an eight yard volley through a posse of players to find the net.

The large and vocal Peacocks’ support were then sent further into delirium when their side scored a brilliant second goal after five minutes. A Yellows clearance was returned by Grimes to pick out Andrew Neal who took a sublime touch past a defender on the edge of the box before volleying home a spectacular strike into the top corner for his 14th league goal of the campaign. Wright lost his footing as he shaped to cross as Town continued on the front foot, but they then conceded on 13 minutes when the Yellows scored with their first attempt. River Allen passed inside to Chris Shephard and his shot from the left side of the area bounced over the dive of Lloyd Irish to find the far corner.

This goal was the foothold the hosts needed as they grew into the game. Irish clutched a cross-shot from Alex Fletcher and then Shephard won the ball in the middle but fired his effort over the top. The majority of Tiverton’s threat was coming down the left where they were worryingly given far too much time and space, winning a series of corners which Town defended until the 38th minute when the home side drew level. Again the avenue came down the left, Noah Smerdon having the freedom of the park to reach the box and find Allen in the middle. His shot was kept out by a fine save from Irish, however the danger wasn’t cleared and when Fletcher crossed back into the middle Jordan Bastin was unchallenged as he guided his header into the net.

The Peacocks found some respite in the final stages of the half as they mounted some pressure, a sign of things to come after the break. Williams cut out a Lewis Hall cross with Wright waiting in the centre, then a Brett corner was met by Grimes’ header, only for Steve Colwell to hack off the line. A Tiverton breakaway ended with Bastin driving wide of the far post as a thoroughly entertaining first half ended all square, probably a fair reflection of events.

The second period was an altogether different affair. The tone of the half was set early on, a Brett corner falling for Wright to turn and fire goalwards, only to see his effort kept out by Williams’ legs. A break by Ollie Chamberlain fed Harry Kite whose cross dissected his team mates waiting in the middle, then Jamie Price’s header at the back post drifted just over from Brett’s corner. Another couple of corners turned the screw further, Michael Landricombe heading over his own bar to clear before Town made their only change just past the hour when Dan Sullivan replaced Owen Windsor.

Sullivan soon made an impact, having a shot blocked following yet another Brett corner, with follow-ups from Adelsbury and Sullivan again suffering the same fate. Advantage was then played, allowing Sullivan to charge down the left before squaring to Wright but with the goal at his mercy the Town captain didn’t connect cleanly and the ball was cleared by Smerdon as it rolled towards the line.

Colwell fired wide in an isolated Tiverton raid as the Peacocks continued to hammer on the Yellows’ door. A neat Neal backheel set up Sullivan for a shooting opportunity which he took first time and although Williams failed to hold, he recovered to gather before Sullivan could capitalize. A Brett free kick was cleared to Sullivan, but he miscued his shot while the home defence were working overtime in stemming the surge towards their goal from the visitors who continued to mount up the tally of corners. Sullivan saw his strike held at the second attempt by Williams as Tiverton took every opportunity to run the clock down as five minutes of stoppage time was signalled.

Cue the 93rd minute. Tiverton won a corner following a rare break and when Allen delivered to the near post Fletcher ran in to glance home a header for a gut wrenching winner. Salt was then rubbed in the wound when Sullivan was shown a second yellow card and sent off after a challenge on Allen. Two stud marks on the back of Sullivan’s leg may paint a different story though.

A cracking derby ended with the Peacocks losing to Tiverton for the first time since the 2017 Play-Off Semi-Final, the Yellows going two points clear at the top while Town dropped to fifth. 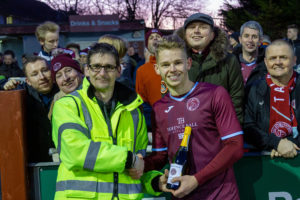