A soggy derby game went Weston’s way as the Peacocks’ unbeaten home run spanning 13 games and four months at the Cygnet Health Care Stadium came to an end. After Weston took the lead soon after the break, Town fought back to equalise but were then caught cold by a second from the visitors who ultimately proved more clinical in front of goal than the below-par Peacocks.

Weston had the majority of early possession but only had Scott Laird’s misdirected shot to show for it while Town, with Ollie Chamberlain making his first start in nearly seven weeks, also struggled to create attacking the Invest Southwest End as conditions became ever heavier underfoot due to steady rain which began moments after kick-off. Matt Wright couldn’t get enough venom in an early attempt easily collected by Luke Purnell before the first real opening for the hosts came when Shane White’s loft down the right released Andrew Neal who chipped over the oncoming Purnell but missed the target, Wright being flagged offside as he went for the loose ball.

The Taunton skipper then saw his shot hit his own player Jamie Price after Nick Grimes had got his head on Ryan Brett’s free kick before the Seagulls had their first real opportunity midway through the half, Bradley Ash glancing a header over on the near post from Laird’s free kick as Weston grew more into the game. Ash planted a shot badly wide after being found by Vince Harper who then squared to James Waite who had time but his shot from the edge of the box failed to test Lloyd Irish.

The main moment of controversy came with just under ten minutes of the half to go. White’s cross in from the right flank fell to Wright whose shot was blocked by the outstretched hand of Greg Tindle. Despite heated protests the officials chose to overlook the blindingly obvious and only a corner was awarded. A Grimes header was then carried over his line by Purnell but nothing doing apart from the award of a free kick for a foul on the keeper as the half ended goalless.

The miserable conditions continued after the break as Wright saw another shot blocked off before Weston struck the first blow after 51 minutes. The Town defence failed to cut out Ash’s return pass to Waite who made room to drill home across Irish into the right-hand corner of the net. Purnell had to be alert as Town looked to respond straight away, gathering just ahead of Neal after Price had delivered the pass. Ben Adelsbury then fired agonisingly wide when Brett’s free kick had been nodded down by Wright before Weston threatened on a breakaway, Irish conceding a free kick in a dangerous position, but Laird’s effort deflected wide.

Town levelled things up after 65 minutes. Owen Windsor burst down the left and after he was challenged Zac Smith picked up the loose ball and was caught by Purnell as he tried to take the ball around him. Referee Rothwell pointed to the spot on this occasion and Neal steered home the penalty for his 19th goal of the campaign. Peacocks’ joy on regaining parity was short-lived though. After Irish had made a fantastic save, getting his fingertips to a curling Laird free kick destined for the top corner. Weston regained the advantage on 74 minutes when Waite ghosted through the defence to set up Ash to slot in with ease from close range.

Laird headed over from Waite’s corner as Weston looked to make the points safe before Town staged a late offensive but without success. Adelsbury’s free kick from distance was comfortably held by Purnell while Brett fired wide and Neal’s turn and shot was blocked. Grimes’ goalward prod was deflected wide before sub Owen Windsor got goalside of the Weston defence but slipped over on the sodden surface as he shaped to shoot, this proving the final sniff for Town as they slipped to their first defeat in seven League outings. 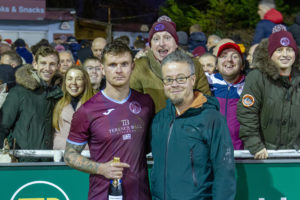 Shane White being presented with his award by match sponsor Ben Mabley, flying the Peacocks flag in Japan!