A second successive two goal haul from Andrew Neal helped the Peacocks edge a thrilling affair against their visitors from Surrey. The Police pegged Town back twice during the first half and even though the hosts forged ahead after the break a late response meant there could be no scope to relax.

There was only one change for the Peacocks from the last game against Beaconsfield, Harry Kite coming in for Owen Windsor. It was the visitors who were first to show though through Lewis Beale. Just after receiving treatment following a clash with Ben Adelsbury, the Police attacker made inroads from the left before seeing his shot kept out at the near post by Lloyd Irish and Louis Birch deposited the loose ball over the stand roof.

After Peacocks’ skipper Matt Wright had been pulled down on the edge of the area, Ryan Brett’s free kick deflected off the wall for a corner from which Town grabbed the lead on the quarter hour. Brett’s corner was only cleared as far as Dan Sullivan on the right and his curling delivery back into the six yard box was bundled in by Jamie Price, with Andrew Neal making sure there was no dispute it had crossed the line.

Sullivan then sent a half volley over the angle as Town looked for more attacking the Innovation By Design End before the Blues equalised after 19 minutes. Dan Akinwunmi’s shot came off Shane White for a corner from which Alex Fisher floated to the near post, Birch flicked on and Beale could hardly miss as he nodded in from on the line. However five minutes on and the game swung back in Town’s favour. After Neal and Sullivan had seen successive efforts blocked following a Harry Kite break, a foul on Adelsbury on halfway saw Zac Smith find Neal with a quick free kick and Town’s top scorer did the rest, outpacing the defence to find space and drill home a shot from just inside the box for a 2-1 advantage.

Town were still unable to stamp total authority on the game though, with the Blues posing a real threat going forward. They should have been on level terms again when Akinwunmi’s cross from the right reached Jack Mazzone on the far post, but Irish smothered the striker’s attempt. Town saw a third goal chalked out for offside after Wright had slotted home from Brett’s pass as halftime approached but any hopes of an interval lead were scuppered by some late Police pressure. Luke Robertson sliced a half chance well wide before a second equaliser arrived three minutes into stoppage time, Beale playing a 1-2 with Robertson and advancing into the area rather too easily and picking out Mazzone who turned to fire past Irish.

The Taunton keeper was first into action when play resumed, diving to his right to turn aside Tyrique Clarke’s volley from 18 yards. The Peacocks responded, with Smith having a shot blocked, then Sullivan being denied by the legs of Forster at the Invest Southwest End before they regained the lead on 55 minutes. Brett’s corner from the right was headed back in by Price on the back post, Nick Grimes’ header was kept out by a reaction save by Mazzone on the line and Wright forced the ball in. After some confusion, the goal was confirmed and Mazzone received a yellow card for impersonating a goalkeeper.

Town soon had daylight between the sides on 63 minutes when they scored a fine fourth. The goal stemmed from an Irish goal kick, picked up in the centre by Jamie Short who had not long been on the field after replacing Kite. The Town sub burst through the middle, found Wright who in turn put a neat pass through to Neal who finished across Forster into the opposite corner.

The Police would not stay in custody though and were soon back on the offensive, Town scrambling to get the ball clear but only as far as Beale whose shot was comfortably saved by Irish. Mazzone then spurned a real chance when a quickly-taken free kick found him but he turned to fire over the top from eight yards. Ollie Chamberlain made a welcome return to the fray with 15 minutes to go, replacing Smith, and he marked the occasion by planting a volley high over the target after a clearance had reached him on the edge of the box.

Then, with six minutes remaining, the visitors narrowed the deficit. Price caught Robertson 20 yards out and Mazzone curled the free kick over the wall and past a static Irish. The game ended on a sour note for Mazzone though after he left a foot in on Sullivan and was shown a second yellow card followed by the obligatory red. The challenge led to a flare-up which saw a booking apiece for each side, but this late incident was at odds with the majority of the game which was played in a good spirit. The Police continued pressing but ran out of time as Town dug in to secure their sixth home League victory on the trot which lifted them up a place to fourth in the table and sent the Peacock supporters home happy in the last home fixture before Christmas. 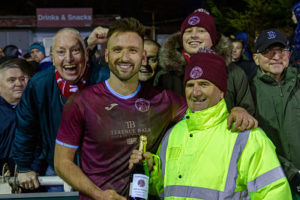