A workmanlike performance from the Peacocks steered them to a pain-free victory over the Buckinghamshire side who accompanied them into the Southern Premier last season, but who have struggled this time round. A single goal lead at the interval was embellished by two more in the early stages of the second half to leave the hosts comfortable winners and increase the relegation fears of the Rams.

West Bromwich Albion loanee Owen Windsor was drafted into the side for his full debut while Dan Sullivan returned after suspension, with Lewis Hall and Harry Kite dropping to the bench. Not that these changes had much impact on a lacklustre opening 25 minutes of the game which proved a bit of an empty page for the reporter’s notebook. Zac Smith’s volley missed the target by a big margin early on while the first glimmer of a threat didn’t arrive until 16 minutes in when Ryan Brett’s ball over the top found Matt Wright, but his shot was blocked as the Beaconsfield defence closed in.

Frustratingly too many final balls let the Peacocks down as they attacked the Innovation By Design End but there was nothing indecisive about the opening goal which arrived somewhat out of the blue after 26 minutes. Sullivan played inside to Brett who was unable to control the ball which ran loose for Wright to smash a fine half volley into the top left corner from the edge of the area. Just two minutes later Town were close to doubling their lead, Windsor breaking away to feed Shane White and from his cutback Andrew Neal took a touch but dragged his effort wide of the opposite post.

Neal had another opportunity later on in the half when Smith’s lob over the defence found him coming in from the left but his volley on the run was too high. The visitors then had a brief flurry just before the break. Louis Stead’s free kick hit the wall while Jon-Jo Bates saw a shot blocked before spurning the Rams’ best and only real chance of the half following a cross from Mayowa Balogun which was mishit by James Taylor to Bates whose first effort was stopped by Nick Grimes and the follow-up was scooped over the bar.

Beaconsfield won two early corners when the action resumed for the second half but soon found themselves two down after 52 minutes. Smith’s punt upfield produced a race for the ball between Neal and Rams’ keeper Myles Bowman. The Peacocks’ frontman won the contest, his header rebounding back off the post for him to collect and drive into the net past the defender on the line. Four minutes later and Town had effectively secured the points. Sullivan’s long clearance was too high for Luke Neville to connect with and Neal was on to it to deftly lob Bowman for his second of the afternoon and 15th of the season in all competitions.

Neal then turned provider, releasing Windsor down the left who advanced into the box, only to see his shot unluckily hit the left-hand post, be deflected onto the right post and then cleared by Taylor from on the line. Wright headed a Brett corner wide on the near post while Sullivan picked up a stray pass to drive over the bar as Town continued to push, their side being freshened up around the midway mark of the half when Jake Jackson and Jamie Short replaced Wright and Windsor.

Beaconsfield registered a couple of attempts when Callum Webb cut in to send a shot over the bar, then Bates screwed an effort wide of the post before a run from Smith for the Peacocks set up Jackson for a strike which was deflected into the side netting. Grimes also saw his shot blocked following a Brett corner while Brett himself won the ball in midfield and tried his luck from the centre circle with Bowman off his line, but the speculative effort missed the target.

As the game drifted to its conclusion, Neville burst forward to fire well over the top as the visitors searched for a consolation. A Shokunbi corner was flicked on to find Balogun beyond the far post but his header back across goal again failed to trouble Lloyd Irish who enjoyed a relatively quiet afternoon as a comfortable three points kept his side up with the leading pack. 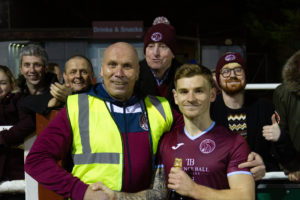