The Peacocks dug in to secure a vital three points against their promotion rivals on a cold and grey afternoon in Dorset. After a first half in which clear opportunities were limited, Town grabbed the one that mattered after the break and then successfully dealt with a surge of home pressure towards the end to claim the points.

Zac Smith returned to the starting eleven after two months out through injury, but Dan Sullivan and Ollie Chamberlain were both missing for the Peacocks who were slow to get going on a very heavy surface which would undoubtedly been unplayable had there been no break in the wet weather.

The early exchanges saw Poole dominate possession without creating a real chance. Jack Dickson evaded two Town challenges to fire in a shot which Lloyd Irish parried and then saved the follow-up from Harry Baker who had already been flagged for offside. Jamie Price made an excellent block to deny Baker another strike and the Poole frontman, joint top scorer in the division, had no more luck when his shot sailed well wide after capitalising on a stray pass. Josh Carmichael planted a free kick over the top for the Dolphins before Town had their first opening, a long Lewis Hall pass looking for Andrew Neal who got a foot in ahead of the defender to send a volley over from a tight angle.

As the Peacocks warmed to the task, they created their best chance on 31 minutes. Harry Kite broke from midfield and found Shane White out wide and his low cross from the right was bundled the wrong side of the post by Matt Wright. Neal’s cross was too high for Wright to connect before Ryan Brett sent Neal away down the right, but he took his shot early from the edge of the box and keeper Luke Cairney made a comfortable stop.

Both sides continued to search for a breakthrough up to the interval without success. Ben Adelsbury headed a Brett free kick over the top while Irish turned wide a shot from Marvin Brooks at the other end and then Luke Holmes had another effort deflect over for a corner. The Dolphins then had a clearer chance just a minute into the second half, Carmichael’s pass setting up Brooks who skied badly wide from the right of the area. Dickson burst into the box to fire in a shot which Irish gathered at the second attempt before the Peacocks began to get on top.

Jamie Short replaced Kite on the hour, soon after which Town had another chance when Brett’s free kick to the back post was headed narrowly wide of the opposite stick by Nick Grimes. Loan signing Jake Jackson then made his Peacocks’ bow, making a quick impression after latching onto Neal’s pass and looping a volley over the bar. The Gloucester striker saw another shot blocked as he surged into the area while Hall’s knockdown into the middle was cleared with no Peacock close enough to take advantage. The only goal of the contest arrived after 73 minutes when Brett’s corner from the right was missed by Cairney, the ball falling amongst a crowd of players and Neal was quickest to react to prod home and send the travelling fans into raptures.

One nearly became two straight after, White’s ball into Neal providing a shooting opportunity which Cairney did well to parry. The final stages of the game saw Town man the barricades as the home side pressed forward to try and regain parity. Carmichael fired well wide after the visitors couldn’t get the ball clear, then sub Ollie Dennett’s flicked header from Dickson’s cross was collected by Irish. Carmichael’s volley from the edge of the box was held by Irish who was also quickly out to gather as Dennett threatened while Josh Leslie-Smith’s attempt missed the target. Despite seven minutes of added time and Poole keeping the pressure on until the final whistle the Peacocks defended brilliantly to keep the hosts at bay and secure their first ever League win at the BlackGold Stadium in four attempts. 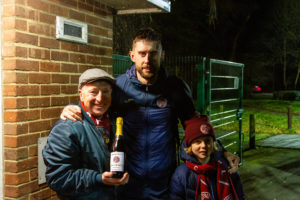