It’s now only one defeat from 13 League games for the Peacocks as they secured the three points against their first time visitors from Hampshire. The damage was done in the first ten minutes of the game when Town scored twice, and they repeated that feat at the opposite end of proceedings to kill opposition hopes of a comeback.

Pre-match plans were disrupted due to Lewis Hall being stuck in M5 traffic and Harry Kite being temporarily ineligible because of an administrative issue with his loan extension while Ollie Chamberlain was not yet fit to return to the starting line-up, meaning a reshuffle and a first League start for Jack Rice. Despite this, the Peacocks were quick out the traps attacking the Innovation By Design End and after Nick Grimes had headed an early Ryan Brett corner over, they grabbed the lead on six minutes with a route one goal. Lloyd Irish launched a kick downfield which reached the right-hand side of the Blackfield box where Andrew Neal emerged to lift the ball high over advancing keeper Lewis Noice and into the far corner.

The Peacocks soon extended their lead with only ten minutes on the clock. Dan Sullivan found Neal in acres of space on the left and the striker darted into the area, his ball across deflecting off Adam Tomasso and falling for Brett to seize on and drill home a precise left-footed finish inside the post. The Watersiders made it clear they were not going to let this early deficit hang over them as they earned a couple of corners from which Jordan Rose’s effort was blocked by Jamie Short and then Sam Griffin headed wide at the far post. Shaquille Gwengwe then fired over after Lerone Plummer had centred from the right.

Town also continued to have their share of openings but Noice was in the right position to make the save on each occasion, catching Matt Wright’s header from a Brett cross and then holding Brett’s free kick before clutching Neal’s glancing header at the near post from another Brett corner.

Attacking the Invest Southwest End after the break, the Peacocks again began brightly. Sullivan’s pass through to Short was cut out by Rose but the Taunton man was on to the loose ball, only for Noice to block. Sullivan then rifled a shot wide while Neal saw his 18 yard strike saved by Noice. It was therefore somewhat against the run of play when the visitors reduced the arrears on 56 minutes. Griffin had space down the left before squaring to Waterfield whose pass to Charlie Gunson was dispatched first time with a fine curling effort from just inside the box.

The goal animated Blackfield into action and they foraged forward in search of an equaliser. Good skill by Gwengwe created an opening but Irish palmed away his angled shot for a corner which the Peacocks’ keeper was unable to hold, Wright’s attempted clearance diverting goalwards from Rose’s interception for Irish to parry one-handed and gather. Gwengwe then cut in to shoot over the top before Gunson fired against the crossbar from 20 yards and Irish saved Luke Rae’s volley from the edge of the area.

Town’s only response during this time was Neal seeing his shot blocked for a corner from which he nearly extended the two goal gap, firing over the angle after Jamie Price had teed him up. However daylight was restored after 80 minutes when Neal received Shane White’s throw and weaved into the box before crossing for Wright to connect with an outstretched leg, the ball rolling tentatively over the line beyond the bemused Noice. Young sub Noah Coppin replaced Wright and was involved in the fourth goal with three minutes remaining, passing to Neal inside, the ball squirming free for Short to run on and steer home from the edge of the area via a deflection of Josh Harfield’s foot.

Another BTC student Callum Watts made his Peacocks’ bow as the final whistle approached, the last action being Gunson’s free kick which sailed just over, confirming Town’s victory and a rise back up to fifth place. 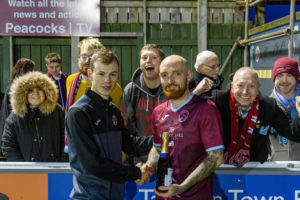