A seesaw Buildbase FA Trophy tie ended in parity, with the Peacocks salvaging a replay with a late equaliser. On paper Town who are a level higher than the Isthmian League side, were the favourites toBackend Editor progress but their performance was ultimately not effective enough to gain control of the game against tricky opponents.

Morning rain had left conditions heavy at the Cygnet Health Care Stadium for the first ever visit of Aveley who might have conceded in the first couple of minutes when Harry Kite threaded a pass through to Ollie Chamberlain in the middle but the midfield man’s left foot shot was too close to keeper David Hughes. Kite’s dangerous cross was then cleared by Jack Macholski as Town made a positive start attacking the Innovation By Design End.

Aveley saw their first attempt come via Jason Raad whose shot was parried and gathered by Lloyd Irish before the visitors went ahead after ten minutes, George Sykes outpacing his man on the left to square to the near post where Alex Akofri got the touch to send the ball over the line. Akofri then got goalside after latching onto a long goal kick but Irish was off his line to block the danger.

Town needed to steady themselves which they did with the equaliser on the quarter hour. A Ryan Brett corner was cleared for another, from which Jamie Price steered a header into the top corner but that good work was nearly undone when Aveley broke at the other end, Jonathan Nzengo feeding Akofri inside and Irish was again needed to palm away his strike from the corner of the six yard box.

A decent spell of pressure from the Peacocks eventually culminated in them grabbing the lead. Andrew Neal turned one way, then the other before firing narrowly over from Shane White’s cross, then Neal again just failed to get a clean connection on Kite’s centre, before White chipped across the area and Kite timed his run to perfection to volley home from beyond the far post on 28 minutes. Two so nearly became three when Chamberlain’s cross from the left was ideal for Matt Wright but Hughes made a stunning one-handed save to claw the header over the bar.

After 35 minutes Town paid the penalty for a foul on the edge of the box, with Raad coolly chipping the free kick over the wall and past the despairing dive of Irish to bring the scores level again. Both sides threatened before the interval, Sykes shanking over while for Taunton Chamberlain directed a half volley over from White’s knockdown and then Brett’s driven cross was parried but Wright was unable to capitalize.

The rain returned for the second half and the quality of play suffered as a result. Aveley began to rack up more pots at goal without unduly causing concern. Akofri curled a shot wide of the target while his team mates Wyan Reid and Raad also dragged and sliced efforts wide. The Peacocks barely created anything during this time, the only real attempt coming when Wright guided a header over from Ben Adelsbury’s diagonal cross.

Scrappy play symptomized the fifth goal of the afternoon, unconvincing defending from the Peacocks leaving Reid to pass through to Sykes who took a touch around Irish and stroked into an empty net on 72 minutes. At this stage it was difficult to see where the hosts were going to conjure up a reply based on what had gone before in the half. However fighting back is fast becoming a trait of Town’s FA Trophy campaign, having had to come from going behind in both their ties with Wimborne, and so it proved again.

The Peacocks’ best move of the game down the right saw substitute Jamie Short find Neal in the middle and he made space to drill in a shot from twelve yards which Hughes again did brilliantly to tip over the bar. Short then intercepted a pass to sprint down the pitch and pass to Neal on the right side of the area but Hughes reached the ball first to gather one-handed and although Neal dispossessed to slide the ball into an unguarded net, the goal was disallowed to Town’s fury.

Aveley finally succumbed with five minutes remaining. Short’s cross from the right was half cleared, Wright touched the ball down and Brett rifled into the far corner to spark relief on the terraces. Town kept on the pressure in the hope of avoiding a lengthy trip to Essex for a replay, Hughes saving from Neal, but a spirited Aveley side had no thoughts of retreating to the corner flag to see out time and kept pressing themselves, Sykes steering wide from Raad’s cross and then the unmarked Shad Ngandu having a sight of goal but his shot was blocked. 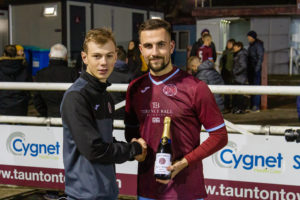