A miserable evening weatherwise failed to deter the Peacocks from gaining what was ultimately a comfortable win over their second placed Cornish visitors. Truro came to the Cygnet Health Care Stadium guarding an undefeated run of eight league games but were second best on the night to a strong Town performance.

Early play proved relatively uneventful, with nothing clear-cut until the 14th minute when Harry Kite fed Andrew Neal who cut inside for a stinging strike which James Hamon did well to turn wide. However Truro’s relief was short lived as from Ryan Brett’s corner, the ball found its way out to Dan Sullivan whose shot took a deflection off Harrison Davis and flew past Hamon into the net for the opening goal.

As drizzle mutated into more persistent and heavy rain, Town continued on the offensive attacking the Invest Southwest End. From another Brett corner, Ben Adelsbury’s effort was headed off the line by James Ward, from which the visitors broke quickly upfield to win a corner of their own. However they had little change out of the Peacocks’ defence which was quick to snuff out the threat of Tyler Harvey who got goalside but saw his square pass cleared before Will Dean had a shot blocked. Sullivan sent a header wide from Neal’s cross as Town ended the first half with a slender lead but in control.

Truro enjoyed a decent spell straight after the break, Deans’ free kick evading everyone in the box while Davis headed Niall Thompsons’ cross over the bar. Harry Kite then won a challenge to set Neal free at the opposite end and from his cross Matt Wright’s header veered wide. Lloyd Irish had barely been tested up till now and a rushed shot from the edge of the box by Luke Jephcott failed to break the trend.

After 63 minutes the Peacocks added a crucial second. Neal won a corner from which Brett delivered and Nick Grimes bulleted a header past Hamon from six yards for his first goal in Claret and Blue. Further openings came, Neal beating two men but Adel Gafaiti made a vital block to deflect the shot for a corner, then Sullivan had a strike blocked and Ollie Chamberlain sent the rebound wide of the target.

Some late pressure from the White Tigers again failed to make any meaningful impression. Niall Thompson blazed way over while Ward sent a free header wide from Dean’s cross and then volleyed onto the terraces as the Peacocks saw the game out with relative ease to secure the points and lift themselves back into the play-off zone. 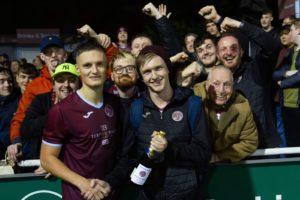