The Peacocks produced one of their most dominant displays of the season in overcoming difficult opponents on the artificial pitch at Elmbridge Sports Hub.

The opening quarter of the game was easily forgotten but the game sprang into life after 26 minutes when a Cheyce Grant “goal” was disallowed for offside. Just a minute later Town were ahead, Dan Sullivan seizing the ball to open the scoring with a shot from the edge of the box. Skipper Matt Wright added a second seven minutes later after converting top scorer Andrew Neal’s cut back across goal, but the home side responded just a minute later when much travelled striker Rene Howe latched onto a long ball and bundled home past Lloyd Irish.

The scoring did not stop there as just two minutes later the visitors restored their two goal cushion. Walton centre back Jay Gasson kicked the ball against team mate Charlie Fox and the ball fell perfectly for Harry Kite to stroke the ball home.

Walton had a chance after 62 minutes, but David Fitzpatrick’s free kick was well saved low down by Irish before the Peacocks extended their lead after 65 minutes when substitute Jamie Short, who had only been on the field for a minute, crossed for Matt Wright to score his second. The hosts thought they had pulled another goal back just three minutes later, but Howe’s acrobatic overhead shot hit the post and rebounded to safety.

The final goal came two minutes from time from a corner by Shane White and it was Ed Palmer who volleyed in from 15 yards to complete a comprehensive win. 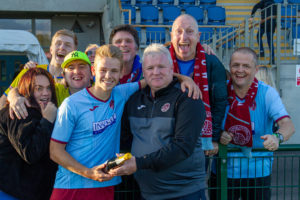