The Peacocks’ two month unbeaten run in the Southern League spanning nine games was ended by the side immediately below them in the table. Although shading the first half, an error just before the break saw them concede and another goal in the second half was sufficient for the hosts despite Andrew Neal’s late strike.

Town began brightly and posted all the efforts on goal in the first quarter. Jamie Price had a shot blocked after Ryan Brett’s corner wasn’t cleared, then Matt Wright held up a long ball to find Neal whose drive was held by Salisbury keeper Gerard Benfield. The former Wimborne stopper also had to be alert to push wide a half volley from Dan Sullivan after Neal had laid the ball back to him. Sullivan saw two further attempts miss the target, picking up a loose ball 20 yards out and firing wide before blasting another shot over the top following a fine run into the box from Harry Kite.
Salisbury began to make more inroads in the final 15 minutes of the half. Up to then their only real pop had been Lewis Benson’s free kick which hit the wall and it was Benson who was at the forefront of the home attacks. After the Peacocks couldn’t clear their lines properly, Benson seized on an opening to fire in a fierce strike which Lloyd Irish did well to tip over. Toby Holmes just failed to make contact with Benson’s cross but with half time imminent, the home side grabbed the lead with a fortuitous goal. Benson and Holmes exchanged passes before the former sent in a powerful cross from the right which Irish couldn’t grasp and could only deflect into his own net at the near post.

There was still time for Ollie Chamberlain to find space on the right side of the area, but his attempted lob had the sting taken out of it by Elliott Wheeler and rolled safely to Benfield. With only a lucky single goal separating the sides at the interval, Town were still well in the game and just needed to sharpen up in front of goal. Neal drilled an early opportunity the wrong side of the post from Sullivan’s pass before it was panic stations at the other end, Town again failing to get the ball clear, leaving Benson to whip another cross in which Bay Downing eventually planted well over the bar.

Sullivan rifled another shot too high, Neal tried to make room for an effort which he ultimately did but tapped wide and then Price frustratingly saw an attempt deflect for another corner following Brett’s first one. The lack of efficiency came back to bite Town after 69 minutes. Benson flashed a corner in from the left and Nathaniel Oseni’s close range header was diverted into his own net by Wright to double Salisbury’s advantage.

The Peacocks’ travelling support were urging their team to show their true colours but the game continued to ebb away from them. Wright profited from a ricochet to find Sullivan and from his cross Brett delivered a header which Benfield palmed out. All too often though set pieces failed to overly concern the Salisbury defence or were bread and butter for Benfield to catch.
Ollie Knowles fired wide for the home side from Benson’s cross before Town brought Jack Rice on for the final ten minutes and he was involved in giving Town a lifeline with seven minutes to go, passing back to Shane White whose cross was headed down by Wright for Neal to turn and shoot past Benfield from close range.

With the visitors pushing up, Salisbury came close to adding more on the break. The pacy Shaquille Hippolyte-Patrick set up Aaron Dawson for a shot which Irish held, then Hippolyte-Patrick had an effort blocked with Benson’s follow-up safely pouched by the Peacocks’ keeper. Town huffed and puffed but disappointingly there was no siege on the home goal to try and salvage a point, and it was Irish again who made a superb stop in added time, Hippolyte-Patrick squaring to the unmarked Benson who was denied by the keeper’s block. A frustrating evening ended in Wiltshire with Town slipping two places down the table to seventh. 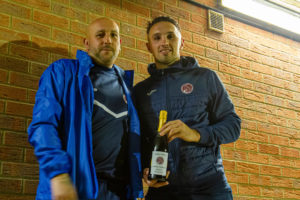