A gritty display by the Peacocks saw them extend their unbeaten run to nine league matches against a slick Hayes side which probably count themselves unfortunate not to have gained some reward from the game. Town built up a two goal lead but had to man the blockades after the visitors pushed hard to draw level.

Shane White, available after suspension, and Matt Wright were both restored to the team on Non-League Day, with the crowd of 701, although very respectable, lower than what the club deserved for their initiatives in reducing admission prices. All the early pressure came from a Hayes side in a somewhat frenetic start to the game, Hassan Jalloh curling a shot wide and Toby Little sending a ball across the face of goal, before the Peacocks began to respond. Ollie Chamberlain’s neat pass set up White whose cross was stabbed just wide by Andrew Neal via a deflection off a Hayes defender.

Ryan Brett fired over while Ed Palmer had his free kick find the wall and his follow-up blocked as Town pressed attacking the Invest Southwest End, the Chamberlain-White combination again nearly paying dividends when White’s cross dissected his teammates in the middle. An assistant’s flag for offside then chalked off James Clark’s goal for the visitors who continued to look menacing going forward, Jalloh marauding through to fire a left footer over and Little’s free kick following the same route.

It was the Peacocks who made the breakthrough on 37 minutes. Dan Sullivan was caught late as he found Jamie Short out wide on the right, referee Eddie playing advantage allowing the Taunton wingback to make the area and send in a looping cross which bounced off the foot of the far post and falling for Chamberlain to fire home.

Lloyd Irish immediately kept his side in front, making a stop from Clark’s shot after Jalloh had barged into the box. A superb passing move from the visitors then nearly opened Town up, Clark playing in Little whose strike was fingertipped onto the bar by Irish but Hayes could have found themselves further behind by the interval, Short squeezing in a centre from the right and keeper Jack Smith blocking Matt Wright’s effort on the line, with White scooping the loose ball over the top.

There was a centre half swap for the second half, with Nick Grimes replacing Ben Adelsbury, and the substitute made his presence felt early on, getting across to prevent Clark pulling the trigger on goal. Neal was crowded out as he tried to force Brett’s corner in at the Innovation By Design End but was on hand to increase the home lead after 55 minutes, nodding in at the back post from Short’s lofted cross.

Hayes kept on the offensive, Joe Grant finding Little whose shot was parried by Irish, so Town ideally needed a third to make the game safe. Chamberlain’s strike was deflected over after Neal had cut the ball back to him, then Neal received a similar pass from Short but took too long and saw his attempt blocked. The clearest chance though fell to White who lifted a shot over the bar from close range after Wright had headed on Brett’s corner.

After Man of the Match White had hacked Phil Roberts’ effort clear, the visitors were back in the game after 73 minutes. It appeared unintentional when Palmer caught Roberts as the Hayes sub tried to intercept a clearance, but a penalty was awarded and Jalloh swept it in without a fuss.

United through everything at the Peacocks in the final stages but the home defence performed valiantly in blocking and clearing the threat. Jalloh’s drive sailed over, as did Ogo Obi’s free kick via the wall, while shots from Roberts and Lyle Della-Verde were thwarted by bodies in the way as Town ended a hard afternoon with an important win ahead of two tough ones on the road. 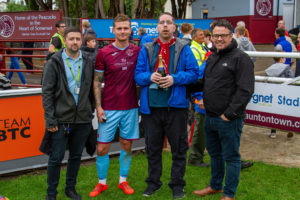